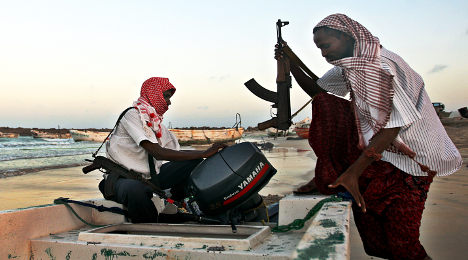 France is to allow armed guards to patrol ships in a bid to ward off attacks from pirates. Photo: Armed Somali pirates prepare ahead of new attacks on ships in the Gulf of Aden : Mohamed Dahir/AFP

France will authorise the deployment of armed guards on ships as part of anti-piracy measures, a move long sought by shipping companies, Prime Minister Jean-Marc Ayrault said in an interview published on Tuesday.

“We will allow the use of private teams who can complement missions being accomplished by the national navy,” Ayrault told the Marin Ouest-France magazine. “Shipping companies have strongly urged this and we have heard them.”

International fleets patrolling the Gulf of Aden and Indian Ocean have greatly curtailed Somali piracy in recent years. Moves by some shipping companies to use armed guards aboard their vessels has also curbed the once-rampant problem.

Since 2008, French shipping companies have enjoyed protection by the French Navy to stave off acts of piracy, but they haven’t been allowed to take on armed guards, unlike those from Britain, Spain or Denmark.

The government’s move will allow French shipping companies “to be on an equal footing with their European counterparts” who already use armed guards, Ayrault added.