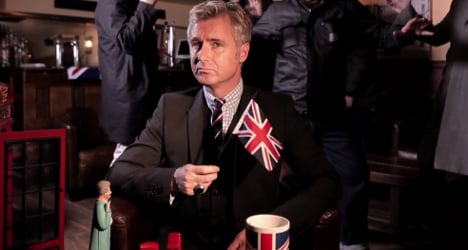 Unless you live in France, and own a TV, you may not have heard of Darren Tulett. The Englishman, however, is something of a celebrity on this side of the Channel.

For years now Tulett has been the face of English football on French TV, after presenting several primetime football shows on Canal Plus, most notably "Match of ze Day", the French version of the famous BBC highlights programme Match of the Day.

Since February, Tulett has been the host of the sports show "Lunchtime," broadcast on Al Jazeera subsidiary BeInSport.

Nobody, least of all “Darren from England” as he’s simply known in France, could have predicted his stratospheric rise from being turned down by McDonald's to the "cheeky Englishman" welcomed into millions of living rooms across France.

The Local caught up with Tulett, and asked him how it all happened.

How did you first end up in France?

I was out one night, celebrating exam results with friends in Manchester, where I was a student, and my best friend Nick at some point said: “Let’s go to Paris together, and have a bit of fun.”

I spoke to him the next day, and he said, “So, are you still on for it?” I had absolutely no memory of the conversation, but took his word for it. A few months later we took the train and the boat over to Paris, and 25 years later we’re still here.

What was your plan?

Honestly, we just intended to get any kind of work we could, live here for a few months, have a laugh, go home to England and have a few stories to tell.

I did a few different jobs, and at one point even got turned down by McDonald’s, but ended up blagging my way into a job as an English teacher with Berlitz.

About six years later, I had started settling down with a French girl, and she asked me: “Are you going to be an English teacher for the rest of your life?”

So we headed back to Brighton, where she worked and I signed on for the dole while applying for jobs as a journalist. Eventually I somehow got a gig writing about football for Bloomberg News in London.

I was starting to get nostalgic for Paris at this point, so in 1996, I persuaded them to transfer me to France to cover the World Cup, 18 months later.

Would you ever consider coming back to England?

The only thing that could possibly tempt me back would be if [Match of the Day host] Gary Lineker called me up and begged me to take his job. But that’s not going to happen.

And I’ve had offers, here and there, from outside France. But nothing to get excited about. If I went back to England now, I’d just be another Englishman. Whereas here I’ve got a niche, I’ve got a one-man market as the cheeky Englishman talking about French football on TV.

I thought the French and the English hated each other

We’re supposed to, there is that idea, but in reality we feed off each other. The French have a saying “Qui aime bien châtie bien”, meaning "tough love" and it's this approach between the two countries that works well.

Being English has always been a huge advantage for me. I can get away with saying certain things in a certain way, and mucking around with my colleagues.

Well, being present in the Stade de France for the 1998 World Cup final was a very special thing. I remember screaming “Yes!” when France’s first goal went in, much to the shock of the other foreign journalists in the stand.

Then this summer, I got invited to play on a “France 98” team at a testimonial for Steve Savidan [a French international forced to retire with a heart condition.]

So 15 years after reporting from the stands at the World Cup Final, there I am taking to the pitch, in a French jersey, with former players Lilian Thuram, Robert Pires, Sylvian Wiltord. It was a pretty amazing moment, and a very special privilege.

What’s it like being the most famous Englishman in France?

Well first of all, it takes a long, long time to get used to being noticed on the street. It starts off with people pointing at you on the Metro, then they ask for an autograph, and then people want to take pictures with you.

Now they’re stopping me on the street and asking me to just say something into their camera – they pass you over to their relatives on the phone. It’s really strange!

I remember once, a few years ago I went to see Marseille play, and before the match went for a drink in the pub and found myself surrounded by 80 boozed-up Marseille supporters.

Out of nowhere they started shouting my name– “Darr-en, Darr-en” – like a football chant. And then before I knew it I was off my feet being carried around the bar on my back by them, like I was crowd-surfing at a rock concert.

You said you’re in a “market of one” as the cheeky Englishman on French TV. Are you an exception?

Not at all. There are plenty of expats and English speakers doing basically the same thing I’m doing, in workplaces all over France. We’ve got something different to add – a different voice, a different way of thinking – and we’re bringing that to all sorts of different companies.

I remember making a conscious decision years ago, to use my Englishness as an asset in France. Once you get past the hurdle of mastering the language, being a foreigner can be a major help to you.

So if you’re in France, and you know you like it here, but you’re stuck in a bit of rut with your career – keep pushing on, be yourself and use that to your advantage.

And don’t be afraid to invent your CV – they’ll never be able to check out the stuff you say you’ve done back home, trust me.

Have you had an interesting career in France? Want to share your experience with The Local's readers? Email [email protected]