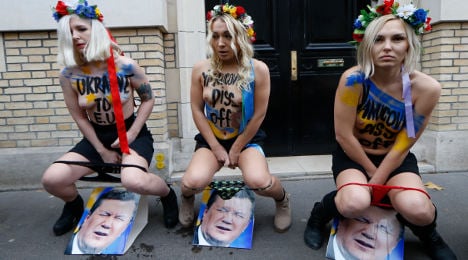 Topless women from the Femen feminist movement on Sunday symbolically urinated on photos of Ukrainian President Viktor Yanukovych in Paris to condemn a crackdown on protesters angry about his rejection of a key EU deal.

Five women from the group gathered in front of the Ukrainian embassy in the morning, bared their breasts and appeared to urinate on the photographs they placed on the sidewalk.

But it was not clear if they were actually urinating or simply passing liquid contained in hidden pouches.

The slogan "Yanukovych piss off!" was painted on their torsos. They then left and there were no arrests.

The protest came after policemen armed with truncheons broke up a 1,000-strong protest in Kiev on Saturday calling for Yanukovych's resignation after he suspended work on a trade and partnership agreement with the European Union that had been years in the making.

Dozens were wounded in the crackdown and more than 30 protesters were detained.

Despite a ban on protests in the heart of the Ukrainian capital, tens of thousands gathered again on Sunday to call for early elections.

The EU deal would have opened borders to goods and set the stage for an easing of travel restrictions but Yanukovych reneged at the last moment, saying his country could not afford to sacrifice trade with Russia. Moscow was opposed to the agreement.

Inna Shevchenko, the head of the Femen movement in France, said: "We came to say to Europe that we need help."

She slammed what she called the "dictatorship" of Yanukovych, who she said was "under the influence" of Russian leader Vladimir Putin

Femen is a Ukrainian group whose members have drawn attention worldwide with nude stunts targeting a range of political and religious figures, including Italy's Silvio Berlusconi and Putin.