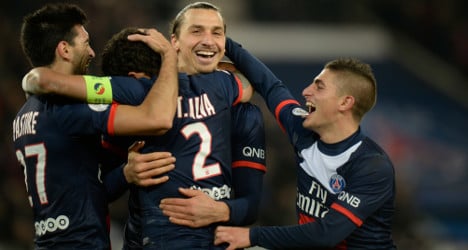 Paris Saint-Germain underlined their superiority over the rest of the French top flight on Sunday as Zlatan Ibrahimovic netted twice in a 4-0 win against Lyon at the Parc des Princes.

Ibrahimovic scored both of his goals from the penalty spot as he moved clear at the top of the Ligue 1 scorers chart, while South Americans Edinson Cavani and captain Thiago Silva also found the target to help PSG continue
their unbeaten record in all competitions this season.

They remain four points clear of Lille and five ahead of Monaco at the top of the standings after easing past a Lyon side who once dominated the French scene themselves but who are currently languishing in mid-table.

But while Lyon coach Remi Garde accepted that his team are "not competing in the same league as Paris", opposite number Laurent Blanc insisted the scoreline was not necessarily a fair reflection on the game.

"The size of the scoreline could make you think it was easy from beginning to end, but Lyon made life difficult for us early on," he said.

"If we keep playing at 100 percent, I think it will be very difficult to beat PSG. But we need to avoid complacency and be at our very best every game."

The build-up to the match was overshadowed by the news that both team buses were stoned on the way to the stadium, while Lyon lost Bafetimbi Gomis to injury in the warm-up.

In his absence, OL played with a three-man central defence and for much of the first half they succeeded in frustrating the hosts.

They were also helped by referee Antony Gautier's decision not to award a penalty when Cavani went down under a challenge from Bakary Kone 16 minutes in.

Alexandre Lacazette had been left to plough a lone furrow up front for Lyon and he had the visitors' best opportunity of the first half, creating space for himself inside the box and lashing a shot against the bar.

But PSG got their noses in front nine minutes before the interval when Cavani met a corner from the left and headed in through the legs of Yoann Gourcuff, who was standing on the near post.

Five minutes later, the Uruguayan was brought down again inside the box. This time, Lyon goalkeeper Remy Vercoutre was the culprit, and a penalty was awarded.

Ibrahimovic sent Vercoutre the wrong way as he coolly chipped into the net, and Lyon's chances of getting back into the game appeared to be over by the interval.

They conceded again on the hour mark, though, Brazil skipper Silva converting the loose ball following a corner for his first ever goal in Ligue 1.

And there was more pain to come for the visitors as Ibrahimovic beat Vercoutre from the spot once again after being fouled by Samuel Umtiti, taking his tally to 20 goals in his last 13 games for club and country.

PSG are now unbeaten in 26 Ligue 1 matches and maintain a safe distance from Lille, who won 1-0 at northern neighbours Valenciennes on Saturday as Nigerian goalkeeper Vincent Enyeama extended his remarkable run without conceding a goal to 945 minutes.

Meanwhile, Monaco proved too strong for Rennes on Saturday despite being without the injured Radamel Falcao — James Rodriguez and Anthony Martial scoring in a 2-0 triumph.

Elsewhere on Sunday, Mickael Landreau equalled fellow goalkeeper Jean-Luc Ettori's record of 602 appearances in France's top flight as he kept a clean sheet for Bastia in a 2-0 win over Evian.

The 34-year-old French international began his career at Nantes in 1996 and won the title with Les Canaris in 2001 before spells at Paris Saint-Germain and Lille, with whom he won the double in 2011.

"I have worked so hard to get to this point. I am enormously lucky," said Landreau after drawing level with Ettori, who spent his entire career at Monaco between 1975 and 1992 and picked up nine caps for France.

Milos Krasic and Wahbi Khazri got the goals for Bastia, who are eighth, while Brazilian forward Jussie scored twice in Bordeaux's 4-0 win against hapless Ajaccio in Sunday's other game.