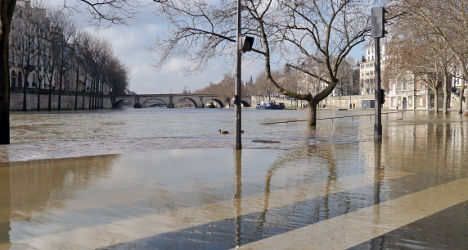 Nearly half a million homes would be lost, and hundreds of thousands left homeless in the Paris region, in the event of a catastrophic flood, says a new report. Photo: Groume/Flickr

A disastrous flood in the Ile-de-France region around Paris, like that seen in 1910, would destroy 430,000 homes, according to a report by the Institute of Urban Development published on Monday.

The deluge would see some 850,000 inhabitants of the region left without homes and would cause up to €20 billion worth of damage, the report added.

Worst hit would be the western edges of the Val-de-Marne department – around the suburbs of Vincennes, Créteil and Orly airport – where up to 123,000 houses could be lost in the event of a “Flood of the Century,” the Institute estimated.

For its part, the Hauts-de-Seine department to the west of the city, including the affluent suburbs of Neuilly-sur-Seine and Courbevoie, could lose 95,000 homes in flood-prone areas.

Some 100,000 homes in the capital itself are at risk of flooding, but study author Ludovic Faytre estimates that reinforced flood protections would save Paris, once the Seine didn’t rise far above the 8.68-metre mark reached in 1910.

Urban sprawl in the last few decades means many more people would be directly impacted by a colossal flood, according to Faytre.

“We’ve managed to limit urban expansion into flood zones, but we’ll have a bit more of a hard time containing urban renewal,” he was quoted as saying by Le Monde.

SEE ALSO: Paris 'unprepared for flood of the century' Monday’s is the latest in a series of worrying reports on the French capital’s readiness for a repeat of the catastrophic, once-in-a-century Great Flood of 1910, which shut down Paris for many weeks, and left many properties in ruin.

In September, the OECD (Organization for Economic Cooperation and Development), itself based in Paris, warned that the city was dangerously unprepared for such an event, blaming organizational failures and bureaucratic overlap between local, regional, and national authorities.

“The absence of a unified strategic vision surrounding the major risk to this strategically essential area reveals a deficit in risk management policies,” said the report,

The OECD also estimated that five million people would be directly and indirectly affected, and significant harm would be done to the entire French economy.

Elsewhere, a report by insurance analysts Swiss Re found that, when it comes to the risk of natural disasters, Paris is one of the world’s most exposed cities.

Measured in terms of “working days lost,” the French capital ranks ninth in the world in terms of the damage likely to ensue after a flood, storm, storm surge or earthquake, the report found.

Also in September, The Local reported how many thousands of artworks were set to be transferred from storage underneath the Louvre museum in Paris, to a location in northern France, due to the risk that a flooding of the Seine could destroy them forever.