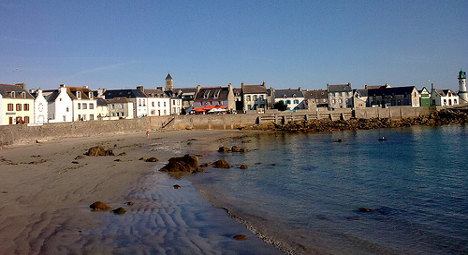 It’s been a long time coming, but after a 35-year wait the residents of the tiny island of Ile de Sein, off Brittany had cause to pop the Champagne corks this weekend.

On Sunday morning the remote island in the Atlantic Ocean witnessed its first birth in over a third of a century when a mother of three had a baby girl.

Nobody it seems, was more elated that the mayor of Ile de Sein, Jean-Pierre Kerloc’h who has 215 inhabitants under his watch.

“This is amazing. The last birth was in 1978. The island is full of old people. I am more used to attending funerals than births. This is exceptional,” the mayor was quoted as saying by Europe1 radio.

The birth of Emily at 6.25am on Sunday was announced later that morning by the island’s doctor Ambroise Menou.

In recent years on the rare times when a newborn has been expected, the birth has taken place on the mainland in Brittany where parents can get access to medical facilities that don’t exist on the island.

But the mother of Emily and her husband, a volunteer firefighter who both live on the island, were determined to end the drought and decided their baby should be born on Ile de Sein.

Emily has boosted the tiny population of kids on the remote island. Among the 215 residents on the island seven children are enrolled at primary school level and another seven at secondary school.

“A new child is so important for this commune”, said the mayor. “For a start it will seriously lower the average age on the island. It’s great,” he added.