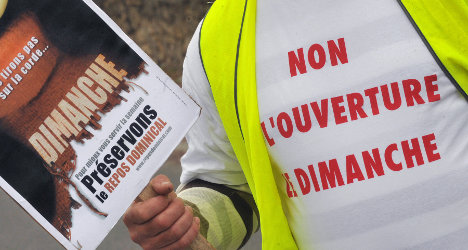 France will bring in a new law on Sunday shop openings in 2014. Photo. P Andrieu/AFP

France should allow shops to open on more Sundays throughout the year, but the "uniqueness" of the traditional day of rest needs to be maintained, an eagerly awaited report into the country's Sunday shopping laws has concluded.

The report, by former head of La Poste Jean-Paul Bailly entitled "Towards a society that adapts but keeps its values" was published on Monday and recommended several changes to improve the current system, including a review of the law to put an end to the current confusion around the local and national rules governing Sunday trading.

Bailly called for a partial easing of the curbs, but anyone who had been hoping he would recommend that France allow shops to open seven days a week will be disappointed.

In a move to appease retailers, Bailly did suggest raising the limit on the number of Sundays local mayors can grant permission for shops to open, from the current maximum of five per year to 12 in the future.

Bailly also recommended a new law to review the number and geographical boundaries of special “authorized” zones, within which shops can open on Sundays, such as the tourist zones in Paris.

Bailly was asked to make his findings after a row erupted earlier this year between several French DIY chains, two of which defied a court order banning them from opening on Sundays in response to the fact a rival chain was was not subject to a ban.

Bailly says all DIY stores should be allowed to open until a new law is in place, but said the current exemption granted to home improvement stores that allows them to open on Sundays also needs to be reviewed.

“I share the basic principles outlined in this report, which also reflects a broad consensus among the French population. Sunday is not like any other day and we don’t want it to become like one,” said Ayrault following the publication of Bailly’s report.

"The issue is not so much extending the possibilities of Sunday work…. but doing so in better, simpler and clearer conditions," Ayrault said.

"The principle will be no opening without something in return for employees."Ayrault said the government would look to create a new law on Sunday openings in 2014. The PM also said rules requiring workers to be paid at higher rates for Sunday shifts would be tightened up

On the eve of the report's publication Labour Minister Michel Sapin, who is in favour of maintaining the strict laws, spoke of the need for an “orderly flexibility” in the regulations, which he described as an “absolute mess”.

Currently in major cities such as Paris, some retailers are excluded from this ban on “travail dominical” (Sunday work) by being located in what’s known as a PUCE, or “périmètre d’usage de consommation exceptionnel” (exceptional consumer usage zone).

Some small supermarkets and small grocery stores are also allowed to open on Sunday mornings.

In cities of more than one million inhabitants, and in certain neighbourhoods which are popular with tourists, or already have a demonstrable tradition of Sunday consumer activity, retailers are allowed to open, but only on the strict condition that they do not force any of their employees to work on Sundays.

Bailly concluded that Sunday work will continue to be done on a voluntary basis with membes of staff having the final say on whether they wish to work or not.

Eric Sherrer from the Clic-P group of unions agreed with most of Bailly's recommendations.

"Sunday needs to be kept as it is in France, so we agree with the main conclusions of the report, although we are not sure whether it is really necessary to give mayors permission to allow shops to open on 12 days each year," Sherrer told The Local on Monday.

Centre-right UMP candidate for Paris mayor, Nathalie Kosciusko-Morizet (known as NKM), last week called for an “extension” of Sunday opening in the French capital, a move which she predicted could create 10,000 new jobs.

Most of France's continental neighbours maintain similar restrictions on Sunday trading but they have been relaxed in Italy, Spain and Portugal in the aftermath of the Euro financial crisis.

It has not just been the question of Sunday opening times that has caused a rumpus between authorities and the retail sector in recent weeks.

Workers at the Sephora store on the Champs Elysées were up in arms after a court ordered it to close by 9pm ,meaning they missed out on extra hours and overtime pay. The move was strongly backed by unions with Clic-P's Sherrer telling The Local: "This is not New York, this law is for Paris".