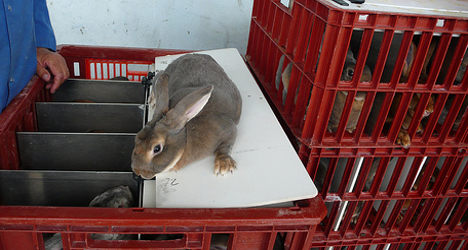 Some 200 animals were rescued on Sunday from a squalid, unlicensed abattoir outside Paris. Archive photo: L214/Flickr

Upon arriving at the small, hidden building on Avenue Paul-Vaillant-Couturier, police were greeted by a horrific scene.

The slaughtering station was “covered in blood, from floor to ceiling”, and no fewer than 200 animals were discovered, “piled on top of one another, without food or water, in the dark,” Christophe Marie from the Brigitte Bardot Foundation told TF1 television.

According to Marie, the chickens, geese, ducks and rabbits found in squalid conditions, were close to being slaughtered when they were discovered on Sunday.

Police also found three illegal, undeclared employees hidden in a back room at the site, according to Le Parisien.

Marie was in no doubt on Monday as to where the ill-treated animals would have ended up if they weren’t rescued.

“There were individual [customers] there, but also some people representing Chinese restaurants,” he told Le Parisien.

The Brigitte Bardot Foundation took all the animals into its care on Sunday, while police have questioned the slaughterhouse’s two managers, and arrested its owner.

The French animal protection charity, founded by former actress Brigitte Bardot, has filed a complaint of animal cruelty against those behind the underground abattoir.

OPINION: Why animals need a new legal status in France Animals in France are 'considered no more than furniture'

Sunday’s discovery comes at a time of great controversy in France regarding the treatment and rights of animals.

In October, a group of leading French intellectuals published a manifesto demanding legislation that would change the legal status of animals from property to “living, sensitive beings.”

Cruelty such as that discovered in La Courneuve on Sunday frequently goes unpunished in France, animal welfare campaigner Reha Hutin told The Local at the time.

“How can the courts in France punish the horrible acts that are carried out against animals if they are considered no more than just furniture?” Hutin asked.

“Since 1999, under French law anyone caught committing cruelty to animals can be fined up to €35,000 and be sentenced to two years in prison, but these punishments are never applied,” she said adding that “France is behind the times” when it comes to the treatment of animals.

Brigitte Bardot’s foundation, for its part, has hit the headlines several times in France in recent months, after a long-running and high-profile campaign to save two sick elephants from being put down at a zoo in Lyon, eastern France.

After six months of fighting to keep Baby and Nepal, both diagnosed with TB, from being killed, Bardot’s star power finally came to the rescue and in July, the pair were escorted to their new home – a ranch owned by the princess of Monaco, of all people.