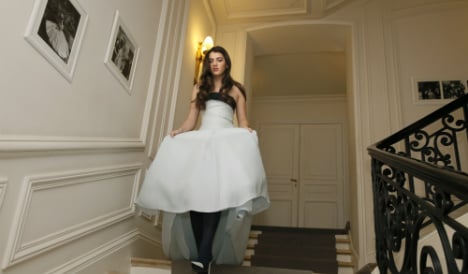 The glittering event saw 20 hand-picked “debutantes” dance, dine and network the night away in dresses loaned by some of Paris’s most famous couture houses.

From Asia, there was Akshita Bhanjdeo of India’s Bhanja dynasty, Filipina “It girl” Monica Urquijo Zobel, and Rebecca Eu, the Canberra-based daughter of a Chinese healthcare company chief.

Now in her 21st year organising the ball, Frenchwoman Ophelie Renouard had made no secret of her quest to track down as many big names as possible.

In another publicity coup this year, she secured the presence of a London taxi driver’s daughter, Lauren Marbe.

The 17-year-old made headlines recently when she notched up an IQ test score of 161, one point higher than Einstein.

“I read about her in the newspapers and so I phoned her up and she said ‘It is not my world but if you invite me I will come’,” Renouard said.

Her father, wearing black tie for the first time, was overwhelmed.

“This is a dream! I still cannot believe it,” he said.

The event at the Automobile Club of France is based on the debutantes balls that were once an established part of the British upper class’s social calendar.

These launched well-born young women into society and — with luck — also introduced them to a potential husband.

But the balls started to fall out of favour in the late 1950s after Queen Elizabeth abolished the practice of the debutantes also being presented at court.

In recent decades, they have been reinvented as glittering fundraisers with the emphasis on philanthropy and contact building rather than finding a husband.

Among the new generation of balls, Renouard’s alone offers participants the chance to borrow an haute couture dress for the night.

“They are not interested in finding a husband, they are too young,” she said.

“What they prefer is the dress, because even if they are privileged they have never been to an haute couture house.”

In previous years “Le Bal” has attracted the daughters of European aristocracy as well as Hollywood A-listers such as Demi Moore and Bruce Willis, Andie MacDowell, Clint Eastwood and Sylvester Stallone.

The ball now has a strong showing from Asia but Renouard says she still has to crack Russia.

“I’m not good on Russia. It’s all about networks…,” she said.