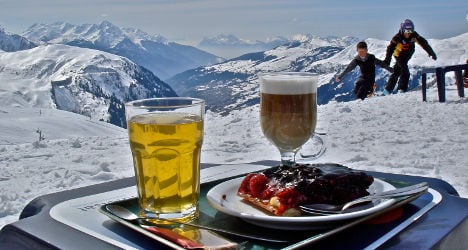 "I simply fell in love with the whole package: mountain life, the delight of sliding down a snow-covered slope. It’s like a fuel for me actually." Photo: Patrick Nouhailler

As the season sets in, the skiers and boarders are waking up, shrugging off the dust of hibernation, and setting off for resorts all across France in search of the ultimate rush.

It’s a strange thing, the lure of snow for human beings. Perhaps it’s because of our origins in water, or for the silence that deep snowfall brings.

It brings out the inner child in all of us, excited by a world made new overnight.

For skiers and boarders this allure has become a lifestyle: a means of experiencing mountain landscapes, a form of exercise, a pursuit which brings its own quintessential rush.

I asked three lifelong ski bums for their thoughts on where their snow addiction comes from.

What can I say, I got hooked from the first moment I put on skis. I was about six I guess, and my father took me down a nursery slope in Scotland.

I just knew, the moment I completed my first faltering snow plough, that this experience was the most fun a human could basically have. Later, as I developed into a decent skier I realised that this thrill was never-ending, it simply didn’t grow less as I skied more.

I came to Meribel first back in 1998 and was just struck by the charm of the place, the sloping Savoyard roofs, the friendliness of the local people.

I worked as a sort of waiter that first season, then came back the next year as an instructor. Although there are a lot of Brits here, I definitely feel the Savoyard culture remains strong.

When I got back here in October this sweet lady who works in the boulangerie waved at me and I felt that familiar thrill of being here again.

Actually, it was skating that first got me hooked. Frozen water. The crisp sound of metal blades moving over ice.

I loved how pretty the pro skaters looked and made my Mum take me every week to the local rink. But when we went on our first skiing holiday that fascination sort of dried up overnight.

I mean I saw the mountains! The Alps were covered in a huge snowfall when we first approached them, the pine trees dusted like something out of Narnia.

And when we made our way up the chair-lift I simply fell in love with the whole package: mountain life, the delight of sliding down a snow-covered slope, and then the glow which stays with you after the day is over.

It’s like a fuel for me actually, I live on it sparingly during the summer months until I can get my fill again in winter.

The Tarentaise valley is a magical place also, I wouldn’t swap it for any other location. Last summer I walked a lot up by the Col de la Vanoise, passing through these traditional Alpine villages.

In the resorts, of course, it’s modern to some degree but up there it really has hardly changed for hundreds of years.

"I fell in love with the whole package." Courchevel, in all its glory. Photo: Guy Moll

I grew up on the snow actually, living in Colorado it was simply what we did. My Dad was an instructor so I started real young, perhaps three or four years old on my first skis.

Then when snowboarding came about, that just had this whole new energy about it: free of tradition, you know, no kind of rules or dogma to get caught up in.

I moved to Chamonix in my early twenties and have been here ever since. I remember driving in and seeing Mont Blanc for the first time, now that’s a sight I’m not going to forget.

Chamonix is basically the place for boarders, too, so I felt right at home here. The free riding in this region is just amongst the best in the world, plus there are epic powder drops, tree runs, and some steep chutes which I’ve never found anywhere else.

Chamonix seems to attract the hard-core, I would say: those snow boarders looking for something to really challenge them. We have the Red Bull Freeride World Tour here every year which is a highlight, too, and that attracts some of the world’s best riders.

I plan to live here for the rest of my life really, as long as the snow keeps falling. Piers Moore Ede is the author of All Kinds of Magic and Honey and Dust, which was nominated for the DH Lawrence Prize for travel writing. He occasionally blogs for Alpine Action chalets in the French Alpine resort of Meribel.