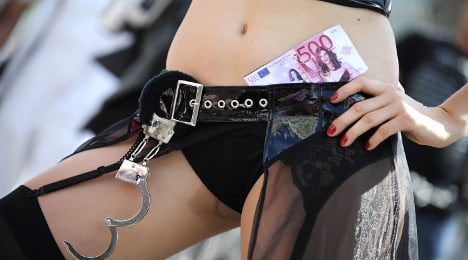 Students play the roles of prostitutes at a protest in German city of Hanover to draw attention to the fact that many must work as prostitutes to fund their studies. Photo: Nigel Treblin/AFP

French lawmakers are to debate a prostitution law on Friday that would penalize clients instead of sex workers.

Here is the situation in other European Union countries:

Sweden pioneered the punishment of those who pay for sex in 1999, with six-month prison terms and a fine based on the client's income. It remains to be seen whether the law can be enforced owing to a rise in use of the Internet to procure sex.

Norway followed Sweden's example in 2009. A six-month prison term can be raised to one year if the nature of the sex act is "particularly degrading". Sex workers initially faded from view in Oslo but are gradually returning.

Those who pay for sex can go to prison for a year if the sex worker is an adult, or for two years if the prostitute is a minor. No prison terms have been handed down so far by courts in those three countries.

Pimping and soliciting are both illegal. Clients of prostitutes forced into sex work are prosecuted, even if the client was unaware of any coercion. But prostitution is not a violation if the sex worker is self-employed, owns the site where sex takes place and does not create a public nuisance.

Seeking sex from a prostitute is punished by up to 10 years in prison, but prostitution itself is not forbidden and "massage parlours" are tolerated.

Barcelona levies fines of up to 3,000 euros ($4,050) for clients, and from €300-750 euros for prostitutes working on the street. Madrid has proposed fines of €750-3,000 for clients. Prostitution itself is tolerated in Spain, and La Junquera, a town on the border with France, has an active sex industry.

Prostitution was legalized in 1999. Sex workers must declare their earnings and pay taxes. In 2012, experts concluded that adopting the Swedish model would probably not lead to a decline in prostitution.

Prostitution has been regulated since 2002. Voluntary sex workers can be either independent or salaried and get unemployment insurance and medical coverage. Brothels exist but it is illegal to pimp someone out against their will.

Voluntary prostitution by adults was legalized in 2000, along with pimping of willing workers. Sex workers in established brothels receive salaries and have work contracts, social protection, unemployment insurance and pensions.

Prostitution is allowed unless it is forced. Sex workers must be at least  16. In August, Zurich launched a sex "drive-in", a new addition to the sector.

Sex workers can register as independent workers and brothels are authorised in some cities. A special 'Eros Centre' with bedrooms, parking for clients, and an on-site medical centre and police station is planned for 2016 near Liege.  Other European countries:

Some forbid prostitution but do not punish clients, as in Finland and Romania.

Others tolerate it but prosecute pimping and solicitation, such as in Estonia, Italy, Poland and Portugal.