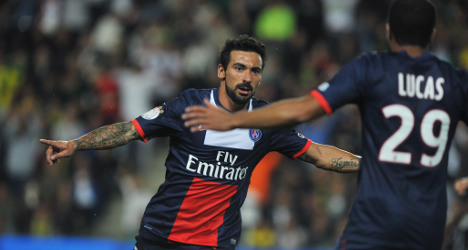 Lyon face the mammoth task of halting the progress of French highfliers Paris Saint-Germain in Parc des Princes on Sunday as the focus turns back from Europe to Ligue 1 action.

The Parisians are riding a wave of confidence on all fronts after advancing to the Champions League knock-out round at home on Wednesday.

The big-spending Ligue 1 leaders are now unbeaten in 35 games in all competitions, and host former French giants Lyon, sitting seventh, who ply their trade in the less lucrative Europa League these days, qualifying for the knockout stages with a 1-0 win over Spanish side valencia on Thursday.

Any slip-up by PSG would help their rivals Lille and Monaco, both still in touching distance of the leaders at four and five points respectively.

Lille travel to struggling Valenciennes bidding to notch up a tenth straight game without conceding a goal.

"The atmosphere is good. We have to build on the momentum from Nantes (last weekend) against a very good Rennes," said Monaco's Portuguese midfielder Joao Moutinho.

Colombian striker Radamel Falcao will not be fit for the Rennes game after pulling a right thigh muscle, said coach Claudio Ranieri.

"I don't want to take any risks. He's not going to play against Rennes," said Ranieri, who blamed the player's two international games with Colombia.

Ranieri estimated that without "our goalscorer" the task against Rennes would be "more difficult".

Meanwhile Marseille, who suffered their fifth straight Champions League loss midweek, will be desperate to bounce back at home against Montpellier on Friday.

Marseille, sitting fourth, five points off Monaco, can count on the return of attacking midfielder Dimitri Payet, who was ruled out of the Champions League defeat to Arsenal with a swollen right knee.

Montpellier coach Jean Fernandez, meanwhile, said he was both worried and excited by meeting his former team.

"I always feel a bit nostalgic when I play against Marseille. I spent five seasons there as a player, but I have lived great moments as a coach too," said Fernandez who took over at Montpellier, who are struggling in 16th place,
this season.

Nantes, in fifth, need to win at Guingamp to keep pace with the leading trio. Guingamp are in eighth position, level on 19 points with Lyon, Reims and Bastia.

Saint-Etienne can benefit from the presence of their fans this week and the return of Brazilian Brandao against visiting Reims.

Brandao was suspended for their previous game against Nice. 'Les Verts' were also hit by their supporters not being allowed to travel to watch the team between now and the end of the calendar year following crowd trouble last weekend.

The measures mean that Saint-Etienne will have no backing during matches at Rennes and Montpellier in Ligue 1 and at PSG in the last 16 of the League Cup next month.

Tailenders Ajaccio and Sochaux are on the move travelling to Bordeaux and Toulouse respectively.