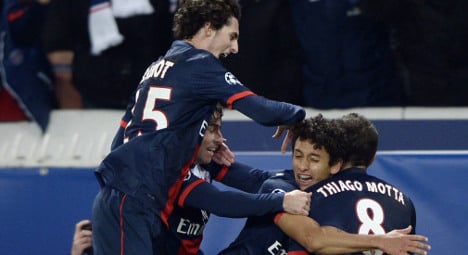 PSG players celebrate their win over Olympiakos, which saw them into the last 16 of the Champions League. Photo: Franck Fife/AFP

Paris Saint-Germain coach Laurent Blanc sought to downplay his side's Champions League prospects after they qualified for the last 16 by beating Olympiakos on Wednesday.

PSG only needed a draw to secure top spot in the section and Zlatan Ibrahimovic gave them a dream start, opening the scoring inside seven minutes.

The sending-off of Marco Verratti early in the second half left the hosts down to 10 men, and Olympiakos profited from their man advantage to draw level through Kostas Manolas with nine minutes remaining.

However, Edinson Cavani's 90th-minute strike handed PSG the win as they progress while Olympiakos are left to fight it out with Benfica for the second qualifying berth in the last round of games after the Portuguese outfit won 3-2 at Anderlecht.

The big-spending Ligue 1 leaders are now unbeaten in 35 games in all competitions and remain on course to at least match last season's run to the quarter-finals, when they lost to Barcelona on away goals.

"The first thing we must do is aim to finish first in our group, and we have done that, so we are very satisfied," said Blanc, who has remarkably not lost since replacing Carlo Ancelotti in the Paris dugout in the summer.

"But you know the Champions League is a very difficult competition to win. There are other clubs out there who can say with greater legitimacy than us that they can win it, that's for sure.

"I think we also need to wait and see who we might face when the draw is made. If you get the right draw, it gives you more of a chance of going through than if you a big name. I don't know who, but maybe a Catalan team for example," he added, although Real Madrid and Atletico Madrid – who have both won their groups – are the only two teams PSG are certain to avoid in next month's draw.

"Finishing first was a really important objective for us. We are ambitious, we want to go as far as possible, but we must go one step at a time. The next step is to see which teams are also through, who finishes second in the other groups, and then hopefully we can get a kind draw."

Blanc was pleased with his side's display against Olympiakos, in particular their strength in adversity as they recovered from Verratti's red card and Manolas's equaliser – which was allowed to stand despite Chori Dominguez being in an offside position in the build-up – to triumph for the fourth time in five Group C matches.

Verratti has had disciplinary problems ever since arriving at PSG last year, and Blanc's predecessor Ancelotti accused the young Italian of picking up too many stupid cautions. However, Blanc felt that the sending-off was
harsh.

"He deserved his first yellow card for handball. That was stupid, although it broke up an attack so it helped the team.

"You know how many fouls Marco Verratti committed? Two. I am not defending him but these are things that happen in a game and, with his reputation, he paid the price.

"The solidarity and desire shown by the players with 10 men, to keep pushing forward and win the game rather than just sitting back, is a quality that great teams must have. Sometimes, things can go against you in games,
like tonight, and we need to be able to call on that mental strength."

PSG, who are four points clear in Ligue 1 before playing Lyon on Sunday, will go to Benfica next month with the pressure off, but the battle for second place in Group C will go to the wire.

Olympiakos and Benfica are level on seven points apiece, and the Greeks will go through with a win at home to Anderlecht in their last game, but anything less will allow the Portuguese side in.

They would have been pleased to hear Blanc say that he would field a strong side in that final match, and the Greek club's coach Michel believes his side deserve to advance.

"Olympiakos are capable of playing in the same manner wherever we go," said the former Real Madrid player. "This is a positive thing. The essential thing is that we put in a great effort tonight and we deserve to go through.

That is what we need to have in mind when we face Anderlecht." 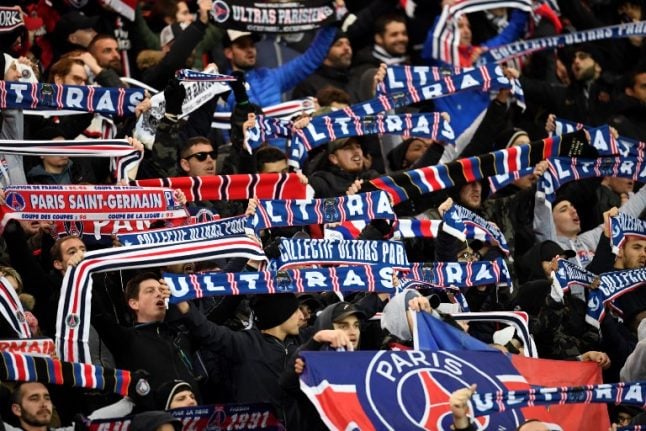