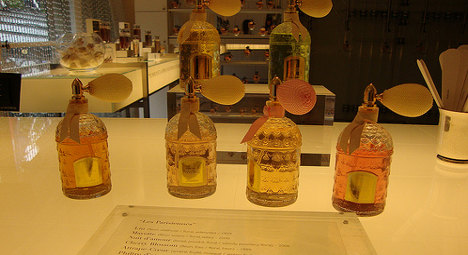 Upmarket Guerlain fragrances have been targeted by the thieves who have a penchant for perfumes. Photo: Miss Maii/flickr

Police are sniffing out thieves who hijacked a lorry transporting Rochas perfumes in the latest in a spate of robberies targeting upmarket French fragrances.

Posh beauty products valued at tens of thousands of euros are expected to resurface on the pre-Christmas black market following the hold-up on Wednesday evening outside a Rochas production centre in the west of Paris.

The driver, who was attacked with tear gas and a stun gun, was found tied up on the road at the scene, and the partially emptied lorry was discovered in a nearby forest.

Thieves recently carried out a similar operation against a lorry carrying Guerlain perfumes in the same area and in June 2012 more than €2 million ($2.7 million) worth of the company's upmarket products were stolen from its factory at Orphin, also in the western suburbs of Paris.

"The way they were carried out is similar but it is too early to say if they were all the work of one gang," a police source told AFP