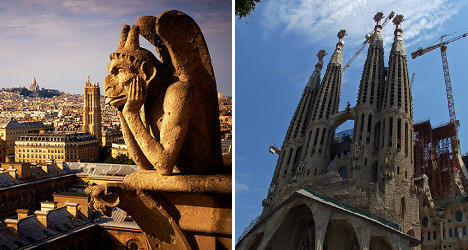 Like the idea of going from Paris to Barcelona by train in six hours and 20 minutes? Tickets are on sale forthe new service. Photo: Travelingeric / KeithLaverac - FLickr

The new link will "overcome an historic and geographic barrier", Rajoy said at a joint news conference with the French leader.

Hollande hailed the start of the service as a "great success" but added that "it took 20 years".

The two countries' high-speed networks were linked earlier this year but passengers still had to change trains at Figueres, near the French border, a manoeuvre that added 20 minutes to the journey time.

Previously, rail passengers had to take an overnight train to make the trip.

Spain's RENFE railways operator and France's SNCF will run the line together.

There will also be one daily return trip between Marseille, Barcelona and Madrid, it said.

Tickets go on sale on Thursday via both companies' websites and prices range from €59 ($80) to €170 for a one-way trip between the Catalan and French capitals.

Other 'high-speed' connections will include Madrid to Marseilles in seven hours, with pricing from €89 to €172 one-way and Barcelona–Toulouse in three hours (from €39 to €79).

In addition, a service will link Barcelona and Lyon in just under five hours with prices from €49 to €114 one way.

The new, faster Barcelona to Marseille, meanwhile trip will take four and a quarter hours and cost from €49 and €100 .

Railway authorities in Spain and France approved the use of the double-decker high-speed trains on each nation's tracks at the end of November.

The final goal is to cut the Paris-Barcelona travel time to 5 hours and 35 minutes once the track from Perpignan to Nimes in southern France is upgraded for high-speed travel, not expected until at least 2021.

Spain now boasts 3,000 kilometres of active high-speed lines, the second longest such network in the world. Only China has more.

To visit the SNCF ticket web site, you can CLICK HERE or on the image below.