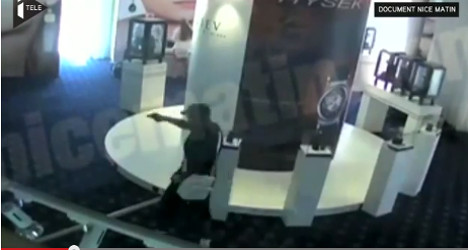 The hold-up, at the Carlton Hotel on the promenade in Cannes, famous for its annual film festival, in July this year was described as the biggest ever diamond heist in France and one of the world's largest ever hauls of jewellery.

What was perhaps surprising was that the heist did not appear to have been carried out by an Ocean's Eleven style criminal gang but by a lone gunman in broad daylight.

CCTV images released to local newspaper Nice Matin this week show staff arrive with the jewellery in a briefcase ready to be placed into various display cabinets in a hall on the Carlton hotel’s ground floor.

There appears to be three security guards present, one of whom is seen pacing around the room.

Suddenly the robber bursts into the room threatening staff with a gun and aiming it at them directly. With his face covered with a scarf or bandana he then goes over and picks up the briefcase, containing jewels and watches encrusted with diamonds and various boxes before scarpering. The whole thing is over in a flash.

The suspect disappeared and is still on the run.

The hold-up was France's biggest diamond heist, eclipsing a 2008 incident when three men stole almost every piece on display at a jewellery exhibition in Paris, a theft valued at 85 million euros.

"It all happened very quickly and without any violence,"  the local prosecutor said at the time.

Huge posters of the diamonds, belonging to jeweller Leviev, with images of pink flowers had been affixed to the walls to advertise the jewels' presence to the public.

Police later raised questions about security at the hotel.