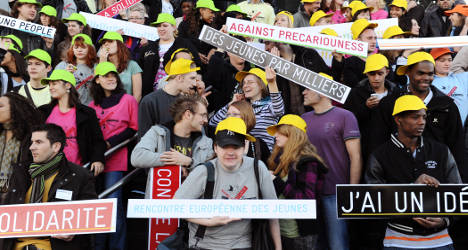 Hollande has come in for some stick in recent months for not keeping his promises but figures published on Thursday showed that, at least when it comes to unemployment, he was a man of his word.

The latest figures on joblessness published on Thursday were a shot in the arm for France's embatled Socialist government and its president François Hollande as they revealed the number of people out of work had fallen by 0.6 percent in October.

The data released by the Ministry of Labour showed there were 20,500 less jobseekers in October than the previous month, meaning the number of unemployed in France stands at 3.27 million. It is the first time in two and half years, that the number of people out of work has fallen in France.

The announcement will be music to the ears of Hollande, who had been under immense pressure to deal with the issue of unemployment.

Despite figures showing joblessness continuing to rise month after month he maintained his much publicised promise made last year to reverse the trend before the end of 2013.

"The reversal of the upward unemployment curve has now started," Hollande said in a statement after the release of official figures.

"An initial result has been achieved," Hollande said. "It conforms to the pledge I had set for the end of this year."

"The statistics published today confirm that the battle for employment can maybe be won," he said. "It will take the necessary time, month after month, to reduce unemployment in France."

Time had been running out for Hollande to keep his promise and earlier in the day he appeared to have a wobble and looked like he was laying the groundwork for eventually backing down.

"The battle against unemployment will take as long as is necessary," said the beleagured head of state, who is permanently under pressure with weekly polls suggesting he is the most unpopular president in history.

"The battle is underway. It will be played out month by month. We must work unceasingly. What matters is that we alter the trend. Unemployment must stop rising,” Hollande said.

Hollande later backtracked somewhat telling AFP during the visit that he was "convinced" unemployment would stop rising by the end of the year.

"From the fight to reverse the rise in unemployment, we must move on to the fight for a continuing decline in the number of unemployed, and intensify it," he said.

Economists and other experts had said there was little chance that unemployment would stop rising without sustained economic growth.

"I was always more than sceptical of this commitment," said Jean-Claude Mailly, the head of the FO union.

"When you have sluggish growth and you see an accumulation of restructuring plans, a rise in redundancies, this is a gamble that is more than difficult to win," he said.