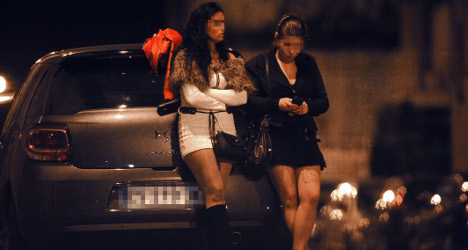 Is imposing steep fines on those who pay for sex the right way to go? France thinks so. Photo: Remi Gabalda/AFP

France's National Assembly is set on Wednesday to discuss a new bill on prostitution, which would, among other provisions, introduce fines for clients of sex workers of up to €1,500 for a first offence and double that amount if they are caught for a second time.

The issue has provoked fierce debate in France in recent weeks. Here, The Local gets the contrasting views of three people intimately involved in the world of prostitution.

Hélène de Rugy is Delegate-General at Amicale du Nid, a group which has, since 1946, worked with women, men and transsexuals to give them support in leaving the life of sex work. She and her organization support the law.

"We work with 4,600 people every year, and every one of them despises prostitution, rather than choosing it freely, as some claim. They are either coerced into sex work by their pimp, or they’re so desperate financially that they feel they have no choice but to continue with it.

"The bill will give essential support to people who want to get out of prostitution, and help them reintegrate into society with jobs, and accommodation.

"Prostitutes who come to us, do sometimes force themselves to believe they are choosing their lifestyle, because accepting they are victims would be psychologically too much for them to take. In the end they confront this reality, though.

"In our experience, if you offer them an alternative way of life, they will leave sex work. And this law provides proper funding and a plan for that.

"Secondly, it strengthens penalties against those who use prostitutes.

"This has been controversial in France, but it’s really very simple. It is absolutely unacceptable in a democratic society that one human being should be allowed to buy another human being’s body.

"There is no 'double standard' or hypocrisy in criminalizing the purchase of sex, while not criminalizing prostitutes. This is not a business arrangement like any other, it is always an act of violence, and it’s completely perverse to think of a human body as a product.

"With prostitution, there are no sellers and buyers, only victims and perpetrators.

"As for liberty and sexual freedom? With prostitution, there is plenty of sexual freedom for the purchasers, and none at all for those being purchased.

"We accept that increasing penalties for clients could possibly lead to risky behaviour, and endanger sex workers. This is a real concern, and we share it.

"But the reality is that the life of a prostitute is already plagued by violence, and the best way of protecting them is to help them leave prostitution. This law will help them do that."

Manon is a 26-year-old woman who has worked as a prostitute in the south-western city of Toulouse for five years. She and the sex workers’ union STRASS, for which she is a spokeswoman, are opposed to the bill.

"Under this proposal, prostitutes will be forced to work in remote places, hidden away so as not to risk being discovered by the police.

"This will simply mean they will be more exposed to violence, theft and rape.

"It will also be more difficult for aid associations and charities to contact prostitutes, so it will be harder for them to try to prevent risky practices, or identify sex workers who may be in trouble and help them get access to housing.

"Secondly, this proposal will lead to a reduction in the number of customers, because they will be worried about being caught by the police.

"So those on a lower income will risk accepting their client’s requirements which can be dangerous, such as not using condoms.

"Therefore, this may encourage prostitutes to employ a third person to watch over them, which would  actually encourage pimping, and not reduce it." Wednesday’s parliamentary debate on prostitution has caused a stir far beyond France. Andrea Matolcsi is Trafficking Officer for Equality Now, a London-based non-profit that seeks to end worldwide discrimination and violence against women. She, and her group, support the French bill.

"The position taken by the French government, which qualifies prostitution as a form of violence against women and an obstacle to gender equality, reflects a strong political will to put an end to this violation of women's rights and dignity.

"We cannot but welcome and applaud this policy approach.

"There is a crucial need to address the demand for prostitution, which fuels trafficking and perpetuates detrimental inequality between women and men.

"We sincerely hope that France is going to show the way to progressive policies on gender equality by discussing a comprehensive strategy embracing all aspects of an abolitionist policy, like the Swedish, Norwegian and Icelandic models.

"Abolishing the system of prostitution is the best way to address the structural inequalities between women and men and at the same time effectively tackle trafficking for sexual exploitation.

"Such abolition can only be effective if perpetrators, like for any form of violence, are held accountable, and sex buyers and pimps are considered as such.

"We also trust that the French government will abolish repressive measures against prostituted persons and develop concrete and sustainable alternatives for people who want to exit prostitution. Awareness raising and education activities and campaigns are also vital to social change."