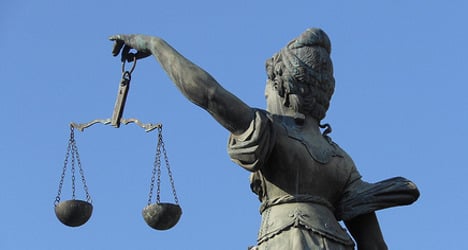 The man, who faces up to 20 years in prison if convicted, is accused of raping the niece of his girlfriend and her two elder sisters.

"I did something that was not good," the 28-year-old father-of-two told a court in the eastern suburb of Bobigny, adding that he had now stopped practising voodoo.

The 41-year-old mother of the girls, who allegedly gave her consent to the rituals, also went on trial for complicity.

The alleged rapes took place between 2010 and 2011, and the suspect is accused of making cuts on the girls' hands and legs and applying a black powder to the wounds. He also washed their genital areas.

The man was arrested in February 2011 after his last alleged rape. The verdict is due on Friday.

Cases of voodoo exorcisms come up from time to time in France, which has a large African community.

Recently four men were sentenced to between three and six years in jail for holding a young woman captive and torturing her as they believed she was possessed. The three men and a woman, former members of the Seventh Day Adventist Church, tied up the Cameroonian teenager in the position of Christ on the cross and kept her bound to a mattress for seven days in May 2011.

The four, who are all of French Caribbean origin, insisted throughout the trial that the victim, named as Antoinette, had consented to the exorcism.

And in September, The Local reported how terrified residents of Limoux, south-western France, alerted police of a possible murder in progress after hearing blood-curdling screams from a building in the Saint Antoine neighbourhood of the town.

Police officers, arriving at the address in question, however, discovered it was the home of the Evangelical Assembly of the Deliverance.

In March, The Local reported how an eight-year-old boy was left for dead in a hotel carpark, after his father and aunt attempted an exorcism on him, believing he had been possessed by evil spirits.