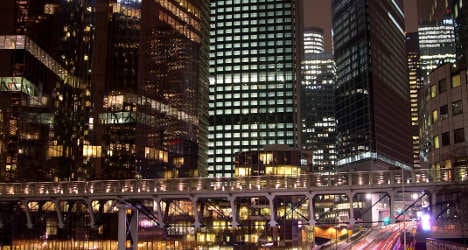 France can rival London as a Chinese business hub, a French minister has claimed. Above is Paris's financial district at La Defense. Photo: Wikimedia

Beijing has expressed interest in internationalising the renminbi – also known as the yuan – whose convertibility is currently controlled, and the British capital already represents 60 percent of renminbi trade outside mainland China, Hong Kong and Taiwan.

"Some agreements will be announced very soon," Pierre Moscovici told AFP during an official visit to Beijing. "Things are in the pipeline."

The UK and China signed a deal last month allowing direct investment in renminbi by financial institutes based in London, where bonds may already be issued in yuan.

About a fifth of transactions between China and France were already denominated in Chinese yuan, Moscovici said, adding that "France is already very well placed".

He also touted African links and eurozone membership as strengths over the UK in the growing competition for investment from the Asian giant.

"France can help open up opportunities in Africa, a continent where China and France both have interests… which can be somewhat complementary," he said.

He called for boosting business in industries from nuclear energy and aviation to health and agribusiness.

"There are no obstacles, no barriers," he said, though he added that "there could be cases where, for reasons of strategic interest, we will hesitate".

Paris has long urged Beijing to increase its investments in their country.

China accounts for just four percent of foreign investments into France, compared to 16 percent in Germany and 23 percent in the United States.