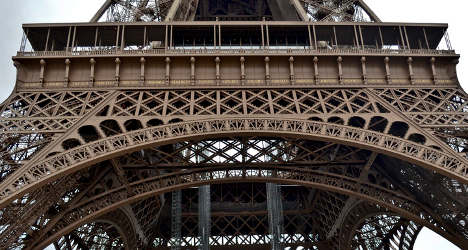 The iron steps, which once connected the tower's second and third levels, were part of a sale of Art Deco furniture by auction house Artcurial in the French capital. (Photo: On the White Line/Flickr)

They steps stand at around three and a half metres high (12 feet) and weigh 750 kilogrammes (1,650 pounds) and were often used in the winter when the lifts stopped working, recalled architect and historian Bertand Lemoine in Le Parisien.

"These steps were really dizzying, you really felt as though you were between the sky and the ground," he said.

The original steps were removed in 1983 to comply with new health and safety regulations.

They were dismantled and cut up into 24 sections of between six feet and 30 feet, Artcurial said in a statement.

One was preserved at the Eiffel Tower while three went to Paris museums. The other 20 were auctioned off.

Construction of the 1,063-foot Eiffel Tower, designed by engineer and architect Gustave Eiffel, began in 1887 and lasted just over two years. It was inaugurated in March 1899.