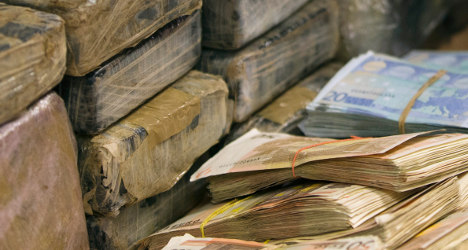 "They consider my client a 'small businessman' and they're imposing taxes on his drug dealing since 2008. It's absolutely extraordinary." Photo: Joel Saget/AFP

Frequently criticized by Europe's finance chiefs for asking for too much from its citizens, the infamous French taxman will have raised a few more eyebrows in Brussels and beyond with his latest move, news of which emerged on Tuesday.

A lawyer for a convicted heroin trafficker currently serving a four-year sentence in the eastern city of Nancy, told Europe 1 radio on Tuesday that French authorities had demanded no less than €80,000 in “small business” taxes on her client’s illegal activities.

“It’s absolutely extraordinary,” said Samira Boudiba. “They’ve sent [a tax bill] to my client, whom they consider a 'small businessman' (micro-entrepreneur), and they’re imposing taxes on his drug dealing since 2008,” she added.

The authorities have reportedly even gone as far as measuring the dealer’s daily personal heroin use, basing their calculations on a going rate of €15 per gram.

“Your personal consumption [of heroin] has been evaluated at four grams per day, and that quantity can be deducted [from the bill],” said the letter.

Indeed, the tax bill was even thorough enough to take into account the heroin trafficker’s frequent commuting between France and Belgium, according to Boudiba.

“Basically, because he drove between Nancy and Namur [in Belgium], which is a 532-km round trip, they’ve very kindly given him a tax allowance of €496 for it,” the lawyer added.

However, perhaps the most astonishing aspect of the tax bill is that it is being levied on the drug dealing itself, rather than other, legal business ventures that the convicted trafficker may have been running.

“How can you tax a business that’s completely illegal?” asked Boudiba. “One gets the impression that this is a way of acknowledging the legality of the trafficking,” she added.

French tax authorities have already seized €40,000 in cash from the dealer, but Boudiba vowed on Tuesday to bring the case to France’s “Conseil Constitutionnel” to challenge its constitutionality.

This isn't the first time that the French taxman has appeared to defy logic and common sense. In May, The Local reported how authorities, unable to get a response from one would-be – but inconveniently deceased – taxpayer at this home address, had sent a tax bill to his grave.

At the time of publication, French tax authorities at the Ministry of Finance had not responded to The Local's request for a response to Boudiba's claims.