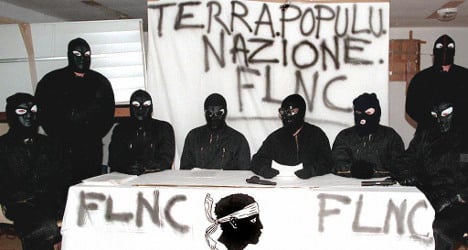 Members of the FNLC (Corsican National Liberation Front) in 1997, which hasclaimed responsibility for bombings on the island. Photo: Michel Domino/AFP

Police on Corsica made 17 arrests Monday in connection with a 2012 wave of arson and bomb attacks on second homes and the attempted car bombing of a public building.

Police sources said the arrests had been made at locations across the French island and involved individuals connected to the island's nationalist movement, sections of which are suspected of having links to organised crime and have also been blamed for a recent spate of murders.

Interior Minister Manuel Valls described the police action as a signal of the government's determination to dismantle Corsica's "mafia" culture.

"We will take as long as it takes to find, arrest and put before a judge all those who believe explosives can be used to solve economic problems or to grab parcels of land," Valls said.

Monday's arrests were linked to investigations being carried out by a Paris-based anti-terrorism judge into, amongst other incidents, two waves of attacks, on May 11 and December 7, 2012, which resulted in more than 40 residences being destroyed or badly damaged, but no injuries.

Most of the targeted properties were coastal villas which had either just been finished or were about to be. The Corsican National Liberation Front (FLNC) claimed responsibility for what it described as actions against
speculation on the island.

The FLNC was also behind the bombing of a number of supermarkets and other retail outlets considered to be symbols of French rule in September 2012.

Seven of Monday's arrests were in connection with an attempted bombing of a local government building at Corte, in the mountainous interior of the island.

The seven were all said to be close to another nationalist group, Ghjuventu Indipendentista.

One of the group's activists, Nicolas Battini, 20, is currently in pre-trial custody on suspicion of trying to blow up the building with a car bomb that did not detonate. Another young Corsican, Stephane Tomasini, has
also been charged with involvement in the incident.

Monday's arrests were condemned by Sulidarita, an organisation that defends the rights of what it sees as Corsican political prisoners in French jails, as "a police roundup directed exclusively at the nationalist movement".

French authorities have vowed to put an end to a wave of killings on Corsica which has claimed some 30 lives since the start of last year, giving the spectacularly beautiful island one of the highest per capita homicide
rates in Europe.

As the suspects detained on Monday are being held under anti-terrorism legislation, they can be retained in custody for up to 96 hours without being charged.