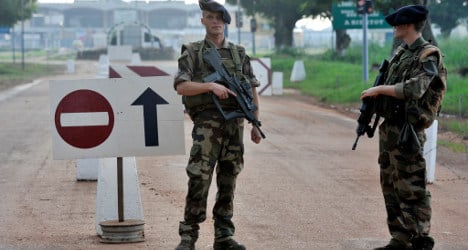 Calls were growing for an international reaction to the violence in CAR amid mounting warnings that the mineral-rich but desperately poor nation was on the verge of genocide and faced a "human catastrophe of epic proportions."

Reports have described a litany of horrors in the landlocked, sprawling country, with security forces and militia gangs razing villages, carrying out public execution-style killings and perpetrating widespread rapes.

France has proposed a UN Security Council resolution that would authorize international troops to use force in its former colony and on Tuesday Defence Minister Jean-Yves Le Drian said Paris would send more troops to assist a beleaguered African mission.

"France will support this African mission with about 1,000 soldiers," Le Drian said on Europe 1 radio, adding that the deployment would be "for a short period, in the range of about six months".

In contrast to its military intervention earlier this year another former colony, Mali, France this time would be working to assist "an African force that is already in the process of being set up", Le Drian said.

CAR Prime Minister Nicolas Tiangaye said after meetings in Paris on Monday that France had talked of adding 800 troops to the 410 French soldiers already based in the capital, Bangui.

Lying in he heart of Africa, CAR has struggled with a series of coups and rebel uprisings since gaining its independence in 1960.

The latest crisis began when a coalition of rebels known as Seleka forced president Francois Bozize to flee in March and replaced him with a rebel leader, Michel Djotodia – the country's first Muslim president.

A transitional government has since lost control of the mineral-rich country of 4.5 million people.

In some parts of CAR, fighting has broken out between mainly Muslim former rebels and militia groups set up to protect Christian communities, which make up about 80 percent of the population.

Western officials and rights groups have said inter-religious tensions are on the rise, with France, the United Nations and the United States all warning of the risk of genocide.

French Foreign Minister Laurent Fabius said on Tuesday that the violence could spread.

"If there is a power vacuum and implosion, it will affect all the countries in the region, in Chad, the Sudans, the Congo, Cameroon," Fabius told France Culture radio.

"It is not called Central Africa for nothing… if the centre of Africa implodes, you will see the consequences."

France has circulated a draft Security Council which could be passed by the 15-member council next week.

The resolution aims to strengthen an African stabilization force in CAR as a first step toward turning it into a formal UN peacekeeping mission.

The force, known as MISCA, currently has about 2,500 troops but has been hampered by a lack of funds, arms and training.

The force's numbers should increase to about 3,600 when it is taken over by the African Union in December.

The Security Council resolution would allow African and French troops to use "all necessary measures" including force to protect civilians in CAR and impose on embargo on all types of arms and ammunition.

Eliasson said CAR is "becoming a breeding ground for extremists and armed groups in a region that is already suffering from conflict."

"A country in the heart of Africa is descending into complete chaos before our eyes," Eliasson told the council. "The situation requires prompt and decisive action."

Rights group Amnesty International has also urged the UN to tackle the "human catastrophe of epic proportions unfolding in the Central African Republic".

"The situation is worsening on a daily basis in CAR, with extrajudicial executions and other unlawful killings, rape and other forms of sexual violence against women and girls widely committed with total impunity by members of the security forces and armed groups alike," Amnesty said.