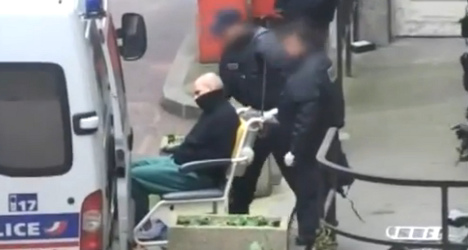 Alleged Paris gunman Abdelhakim Dekhar, who has reportedly gone on hunger strike, is taken in a wheelchair from hospital to prison on Monday morning. Photo: BFMTV/Screengrab

Abdelhakim Dekhar, 48, was arrested Wednesday after a major manhunt following a shooting at the left-wing newspaper Liberation that left a photographer's assistant seriously hurt, and a separate incident where shots were fired at the headquarters of the Societe Generale bank.

On Sunday, a day after being charged with attempted murder, Dekhar stopped taking on food as he began a hunger strike, sources told French media. He is however taking on water, but has so far refused to speak to police or offer any explanation for his acts.

On Saturday he was charged by police and remanded in custody.

"His guilt… must be proven," his lawyer Remi Lorrain told AFP in a first reaction.

"The police investigation is now over and so are, I hope, the violations of his right to be presumed innocent and statements by people who have nothing to do with the case commenting on my client's suspected motives."

The gathering of evidence would also "help to understand (Dekhar's) personality," he added.

Dekhar had been jailed in the 1990s for his role in a "Bonnie-and-Clyde" style multiple murder and left rambling letters denouncing conspiracies and media manipulation.

On Wednesday, he was found in a vehicle in an underground parking lot in the northwestern Paris suburb of Bois-Colombes, after apparently trying to commit suicide, and was in a semi-conscious state.

His DNA matched samples from the scenes of Monday's attacks, officials said.

The undated letters found by investigators after his attacks are incoherent and attempt to explain his actions.

They denounce capitalism and speak of "a plot aimed at the return of fascism in the media, in banks, in the policy on suburbs," Paris prosecutor Frederic Molins said.

The shooter opened fire with a 12-gauge shotgun at Liberation's offices, hitting a 23-year-old photographer's assistant, then fired another blast that hit the roof before leaving within seconds.

He crossed the city to the La Defense business district on its western edge, where he fired several shots outside the main office of the Societe Generale bank, hitting no one.

He hijacked a car and forced the driver to drop him off in the centre of the French capital, before disappearing.

Police say the shooter was the same man who on November 15th stormed into the Paris headquarters of 24-hour television news channel BFMTV, briefly threatening staff with a gun before hurrying out.

Dekhar was convicted in 1998 of buying a gun used in the October 1994 shooting attack by student Florence Rey and her lover Audry Maupin, who moved in left-wing circles.

Three policemen, a taxi driver and Maupin himself were killed in a case that captivated France.

Rey, a middle-class student hitherto unknown to the police, was tried and sentenced to 20 years in jail. She was released in 2009.