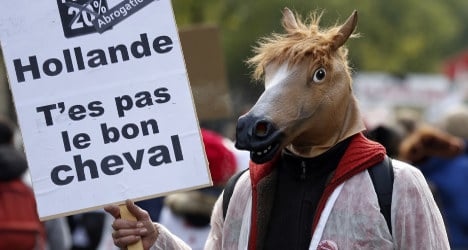 Thousands of angry horse and pony riders descended on Paris along with their animals to complain about tax hikes that they say will put many of them out of business.

The "cavaliers" as they are known rode into town and set up roads blocks at various locations throughout the city including Place de la Bastille and Place de la Nation.

The image above shows a man wearing a horse shaped mask holds a placard reading "Hollande you are not the right horse" as he  takes part in the demonstration against the French government's proposed raising of the Value-Added Tax (VAT) for equestrian centers, in the streets of Paris on Sunday.

According to the government's plan, from 2014 equestrian centers will no longer benefit from the reduced VAT rate of 7% and will have to provide services while including the highest VAT rate of 20% in their prices.

Serge Lecomte, the president of the Fédération Française d'Équitation, has warned the measure "will send 80,000 horses to the abattoir."

Sunday's march, follows a farmers blockade of Paris last Thursday and comes after weeks of vigorous demonstrations with agrifood and road transport workers in the Brittany region of western France.