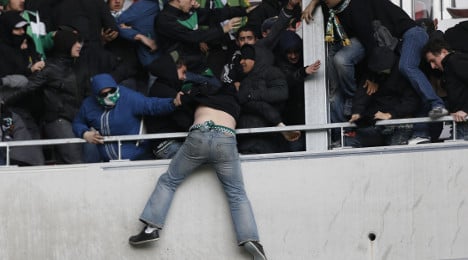 A Saint Etienne supporter is saved by own fans from falling into the tier below after violence breaks out in the game against Nice on Sunday. Photo: Valery Hache/AFP

The away fans had come under fire from sections of the home support, who had torn up seats and were throwing them at their rival supporters. Police formed a protective guard around the away fans before evacuating them from the stadium.

According to unconfirmed sources, the bus carrying Saint-Etienne's fans to the ground had been bombarded with stones as it arrived at the stadium.

Even so, the match between Nice and Saint-Etienne kicked off on time at 5pm local time (1600 GMT). But the images have shocked French football chiefs as well as the country's leading politicians.

Valls added that the behaviour of these "radical" groups of fans showed that France "must not lower its guard and must fight tirelessly… against hooliganism".

Frédéric Thiriez , president of the French football league was harsher in his words: "Enough of these few morons who call themselves fans. They do not even realize they are ruining the image of football.

Thiriez said he would be calling for a meeting with government officials to look into the possibility of banning away supporters from all matches. A drastic move that would be opposed by fans, but may be get support among club chiefs if the outbreaks of violence continue. Jean-Pierre Rivère, the chairman of Nice called upon Thiriez and his cohorts to come up with a solution. “We are sick of this,” he said. “It is for those in charge of French football to come up with ways to stop these kinds of events happening. Every week in football there are incidents. They need to take decisions.”

On Monday public prosecutors in Nice launched an investigation into the incident.     According to a source close to the investigation, the French interior ministry may even discuss the matter.

Some 200 seats were torn up and used as missiles, Nice's head of security Andre Bloch said Sunday night.

Nice's public prosecutor Eric Bedos said that an investigation was underway, although he didn't give any more details.

Nice's deputy mayor Christian Estrosi blamed Saint-Etienne's fans and condemned their "attitude and the acts of vandalism that dishonoured football and even sporting values."

He added that "all the elements at our disposal show that the Saint-Etienne fans behaved like hooligans."

Saint-Etienne official Roland Romeyer did not point his finger at either set of fans but told RTL radio station: "It's clear that these are not normal people, they're not people who had the education that I had from the point of view of respect and human values."

Bans on away fans have already happened in certain high-risk fixtures, with Lyon supporters barred from attending their team's match at rivals St Etienne earlier this year. In recent years the PSG versus Marseille fixture has been subject to a ban on away fans.

Meanwhile on the pitch Pape N'Diaye Souare scored six minutes from time to keep Lille hanging onto Paris Saint-Germain's coat-tails with a 1-0 win over 10-man Toulouse on Sunday.

Lille trail the Ligue 1 leaders by four points following the champions' 3-0 win at Reims on Saturday.

The victory puts the pressure on Monaco, who travel to fellow newly-promoted side Nantes later on Sunday, as they now linger eight points off the pace.

The result extended Rene Girard's team's unbeaten run to nine games while Nigerian international goalkeeper Vincent Enyeama has not conceded a goal in 855 minutes of action.

However, it was a largely unconvincing display from the northerners who struggled to create anything despite playing the final 34 minutes with a numerical advantage following Oscar Trejo's red card.

"The sending off totally changed the direction of the match," complained Toulouse coach Alain Casanova.

"When I see my player with three stitches it makes me think there surely must have been a foul beforehand.

"He was given his marching orders and I regret it because we were really causing them problems on the technical front. We found ourselves with ten with half an hour to go and they didn't have many chances."

Enyeama was required to save his side on three occasions from Ben Yedder, Issiaga Sylla and Adrien Regattin.

But Souare found space at the back post from Florent Balmont's cross from the right to head home and snatch the three points.

The Nigerian international goalkeeper admitted his side had luck on their side.

"I made great saves, are you sure?!" he said. "We were lucky because they had a player sent off while they had been playing very well up until that.

"I don't care about statistics. I don't play attention to 'clean sheets'. We've only played 14 matches and there's still a long way to go. Who knows, we could even win the championship. Nothing is impossible."

HOOLIGANS
Are fans at Euro 2016 hiding flares in their rectums? 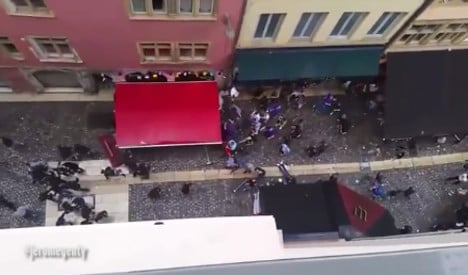 HOOLIGANS
England fans attacked in Lyon ahead of Euro 2016 match 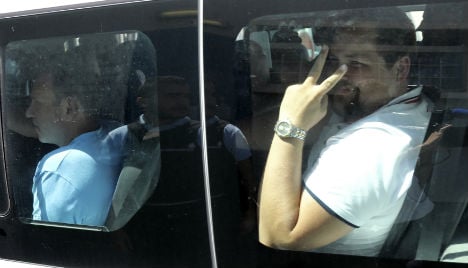