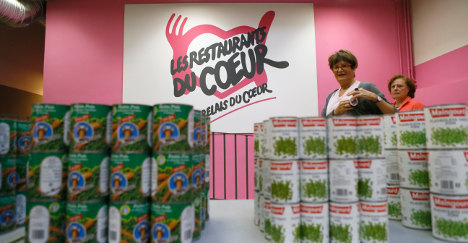 Leading French food charity Restos du Coeur (Restaurants with Heart) announced on Monday that it expected to serve over one million people in France this winter, passing that symbolic mark for the first time.

Launching the organization’s 29th annual winter campaign, its president Olivier Berthe told BFMTV that the continuing stagnation of the French economy was to blame for the increase from 960,000 last winter.

“The socio-economic situation leaves little hope for improvement,” said Berthe, noting that 57 percent of those served by Restos du Coeur are jobseekers.

“They come to us a year, or a year-and-a-half after losing their jobs, when their unemployment benefits decrease,” he added.

The demand for free meals is set to be exacerbated this winter by the fact that public, mainly EU funding – which makes up 30 percent of the group’s income – has been cut dramatically.

This has led Restos du Coeur to make an unusually fervent appeal for the public to make a donation this year, something you can do by following this link.

Contributions up to €521 are 75-percent deductible on your tax bill at the end of the year.

The cause was, however, given a much-needed boost on Monday, when French Agriculture Minister Stéphane Le Foll announced that food donations made by French farmers would be made entirely tax-deductible.

The ministerial decree would be “operational by the end of the year,” said Le Foll.