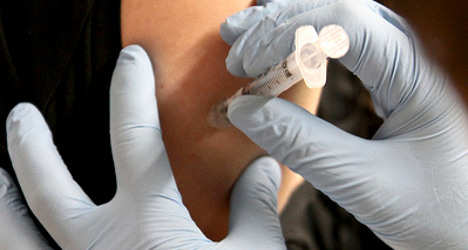 Did a cancer vaccine cause a 18-year-old's multiple sclerosis? Photo: USACE Europe District/AFP

One of France's top medical experts appealed for calm Monday as a scare over a widely-administered vaccine to prevent cervical cancer gathered momentum.

Daniel Floret, the chair of the national committee that oversees vaccinations, said there was no evidence to link |, a vaccine against the human papilloma virus (HPV), with serious auto-immune conditions such as
multiple sclerosis.

Floret was responding to a criminal complaint filed by an 18-year-old woman against Gardasil's French distributor, Sanofi Pasteur MSD. The case was being given prominent play by France's media on Monday.

"The fact that a complaint has been made does not mean there is a problem.

We are putting all the focus on the potential side effects and forgetting what this vaccine brings," said Floret, arguing that the formula had prevented many deaths from cancer.

"None of the international medical safety controls has showed up any link between this vaccine and any kind of auto-immune disease, and millions of doses have been administered," Floret added.

In Britain, where the vaccine is offered to all girls between the ages of 12 and 13, the National Health Service estimates that the programme saves 400 lives per year.

The woman who has initiated criminal proceedings in France was vaccinated with Gardasil at the end of 2010 when she was 15. Within two months she had developed symptoms that included vertigo, vomiting, temporary loss of sight and the use of her legs, and facial paralysis.

According to her lawyer, Jean-Christophe Coubris, she has been diagnosed as suffering from either an acute form of encephalomyelitis, a generalised inflammation of the immune system, or multiple sclerosis.

Her legal case seeks to establish the liability of both Sanofi and France's medicines safety agency (ANSM), arguing that the latter body failed in its statutory duty of care when it authorised the vaccine.

According to Coubris, it is supported by the findings of a medical commission in the southwestern region of Aquitaine, which looked into his client's case and concluded that she may have grounds for complaint, although a potential genetic vulnerability may also have been a factor.

Three other women, aged between 20 and 25, will file similar complaints within the next fortnight, their Paris-based lawyer, Camille Kouchner, told AFP. The three women were all vaccinated between 2008 and 2010.

Two of them now suffer from a chronic skin condition known as Verneuil's disease or hidradenitis suppurativa, while the other one has polymyositis, a generalised inflammation of the muscles that gradually leads to paralysis.

Gardasil was devised by US pharma giant Merck & Co and approved for use by the Food and Drug Administration (FDA) in 2006. Its French distributor is a joint venture set up in 1994 between Merck's vaccine division and France's Sanofi Pasteur.

The other HPV vaccine is Cervarix, made by Britain's GlaxoSmithKline. It was licensed for use in the United States in 2009.

Nearly 530,000 women are diagnosed with cervical cancer annually worldwide and 275,000 die from the disease, according to the UN's World Health Organisation (WHO).

A third of teenage girls in America were vaccinated against HPV in 2010, a doubling compared with 2008, a study published in the US journal Pediatrics said in March.