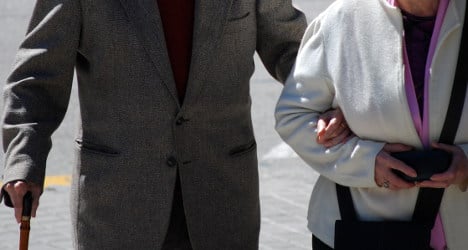 "They feared being separated or dependent, more than they feared death." File photo: Ivan Mlinaric

France has been moved in recent days by the suicide of Georgette and Bernard Cazes, a couple, both aged 86, who took their own lives together in a luxury Paris hotel on Friday.

The couple, together since their teens, checked into the world-famous Hotel Lutetia on Thursday night and at some point in the night, they took medication designed to induce a painless death, according to Le Parisien. The couple also ordered breakfast to be delivered to their room in the morning to ensure they would be found quickly.

Georgette and Bernard were discovered dead, hand-in-hand, in their bed on Friday morning by a member of staff.  Two letters were left by their bedside.

On Monday it was revealed that one of them contained a scathing attack on France’s prohibition of euthanasia.

Bernard and Georgette Cazes, pictured at the age of 29, in 1956; Photo: Screengrab/Le Parisien

“By what right can a person be forced into a cruel [situation], when they wish to end their life peacefully?” asked the letter, parts of which were quoted in Le Parisien on Monday.

“Isn’t my freedom only limited by the freedom of others? By what right can they prevent a person [from ending their life peacefully], when they’ve paid their taxes, have no debts to the state, have worked all their lives, and then done voluntary service?”

Georgette, in particular, expressed her anger at being denied the “gentle death” they sought, by France’s long-standing ban on euthanasia.

Underlining the couple’s determination, their eldest son told Le Parisien on Monday that they had made their decision to die together “several decades ago.”

“They feared being separated or dependent, more than they feared death,” he added.

The episode has reignited a debate in France about the legal status of assisted suicide and euthanasia. That debate will only be inflamed by news on Tuesday that a second couple, also both aged in their eighties had committed suicide together at their home in Paris. The couple also left behind a note explaining their actions.

A 2005 law here made it legal for doctors to administer pain-killing medication at a level they know will, as a secondary effect, shorten a patient’s life.

It remains forbidden, however, to deliberately withhold treatment or nutrition that would prolong life, or to administer drugs with the primary effect of ending a patient’s life (“active euthanasia”).

The lobby of the famous luxury Hotel Lutetia in Paris, where Georgette and Bernard Cazes spent their last night together. Photo: Gary Bembridge

French President François Hollande has promised to bring a bill before the French parliament by the end of 2013.

For his part, Jean-Luc Romero, president of the Association for the Right to Die with Dignity, told The Local on Monday that without a new law on euthanasia, those who wished to end their lives before a prolonged and painful sickness or period of decline, would continue to be forced to use drastic means to do so.

"Unfortunately, the fate of this couple is typical. There are many elderly French people who are forced every year to take their own lives in very unpleasant ways," he said, adding that this case proved beyond doubt that the time had come for French law to change. Friends and neighbours, meanwhile, have been effusive in their praise for the couple, who for decades worked as “brilliant intellectuals” – Bernard an economist and philosopher, and Georgette a teacher of literature and Latin, who wrote school text-books.

“They had such dynamism, such strong willpower,” one neighbour in the Paris suburb of Issy-les-Moulineaux told Le Parisien, others describing them as “distinguished” and “charming.”

“They were a couple who loved each other, you could see it. I can understand how one living on without the other would have seemed impossible,” said another.

They had lived, said their neighbour Jeannine, as they died: “Always arm in arm.”