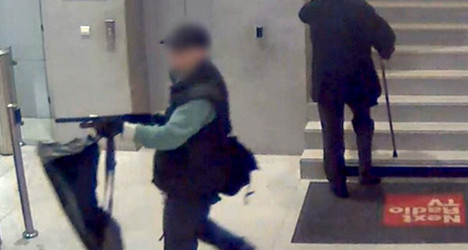 A photograph of the Paris gunman as he threatened staff at BFM TV. French police believe this man was Abdelhakim Dekhar, who had spent most of his recent years in London. Photo: AFP

France said on Thursday the suspect arrested over this week’s shootings in Paris was previously jailed for his role in a “Bonnie-and-Clyde” style multiple murder and left rambling letters denouncing conspiracies and media manipulation.

Abdelhakim Dekhar, 48, was arrested on Wednesday after a major manhunt following a shooting at the left-wing newspaper Liberation that left a photographer’s assistant seriously hurt, and a separate incident where shots were fired at the headquarters of the Societe Generale bank.

He was found in a vehicle in an underground parking lot in the northwestern Paris suburb of Bois-Colombes, after apparently trying to commit suicide, and was in a semi-conscious state.

Dekhar was transferred to a Paris police station, where the authorities were granted an extra 24 hours to keep him in custody pending further investigations for attempted murder and kidnapping.

His DNA matched samples from the scenes of the attacks, officials said.

Dekhar’s lawyer told AFP his client would not be answering any questions for the moment.

“Not having access to his case file, my client has chosen for now to invoke his right to remain silent,” Remi Lorrain said.

A 32-year-old man who housed Dekhar led investigators to the fugitive, and the suspect told the same man he made “a stupid mistake” on the day of the Liberation shooting, a source close to the enquiry told AFP.

The pair first met 13 years ago in London, where Dekhar lived for several years and worked in a restaurant, Paris prosecutor Frederic Molins told a news conference.

British newspapers said Friday he lived in Britain for a total of 13 years and got married there after serving the jail sentence for his role in the multiple murder in France in the 1990s.

He initially moved to Ilford in east London, the Times newspaper said without citing sources.

He then married a Turkish student in Redbridge, northeast London, in February 2000, the Times and London’s Evening Standard newspapers both reported.

Dekhar’s sister, Farida Dekhar-Powell, lives in the commuter town of Shenfield, in Essex, southeast England, and is a French teacher, the Evening Standard said.

“I stopped talking to him 20 years ago. He is not part of my life and that’s how it stays,” she told the Evening Standard.

Dekhar came to France in July with the intention of staying here a month but never returned to London.

“All the evidence today points to his involvement” in the attacks, Interior Minister Manuel Valls said.

‘Fascist plot’
The undated letters found by investigators after his attacks are incoherent and attempt to explain his actions, investigators said.
They denounce capitalism and speak of “a plot aimed at the return of fascism in the media, in banks, in the policy on suburbs”, Molins said.
Dekhar also accused journalists “of being paid to feed lies to citizens” and decried what he saw as the “dehumanisation” of people living in the suburbs.
Molins said the letters merit “being shown to a psychiatrist”.
One letter mentioned Libya, Syria and the situation in the Arab world, news channel BFMTV said.
The shooter opened fire with a 12-gauge shotgun at the offices of Liberation early on Monday, hitting a 23-year-old photographer’s assistant, then fired another blast that hit the roof before leaving within seconds.
He then crossed the city to the La Defense business district on its western edge, where he fired several shots outside the main office of the Societe Generale bank, hitting no one.
He hijacked a car and forced the driver to drop him off in the centre of the French capital, before disappearing.
Police say the shooter was the same man who on November 15 stormed into the Paris headquarters of a 24-hour TV news channel, BFMTV, briefly threatening staff with a gun before hurrying out.
Left-wing radicals
Dekhar was convicted in 1998 of buying a gun used in the October 1994 shooting attack by student Florence Rey and her lover Audry Maupin, who moved in left-wing circles.
Three policemen, a taxi driver and Maupin himself were killed in a case that captivated France.
Investigators at the time compared the young couple to the infamous American outlaws Bonnie and Clyde.
Witnesses at the trial described Dekhar as a mentor to the couple and accused him of exploiting their youth to manipulate them, while his former lawyers have described him as “enigmatic” and “strange”.
Rey, a middle-class student hitherto unknown to the police, was tried and sentenced to 20 years in jail. She was released in 2009.
Dekhar was acquitted of armed assault but found guilty of procuring the weapon and sentenced to four years. He was released soon afterwards, having already served his time in pre-trial detention.