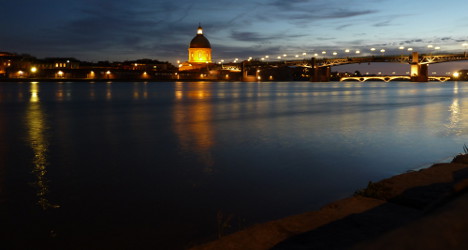 Quai de la Daurade on the Garonne river in Toulouse, where a freezing 67-year-old woman was rescued here on Wednesday, allegedly after being thrown in by two men. Photo: Mr Pigeon/Flickr

The 67-year-old victim had come to the southwestern city of Toulouse on Wednesday from her home in nearby Tarn, to look after her grandchildren, local newspaper La Dépêche said on Thursday

Having completed her duties for the day, she was walking along the banks of the Garonne in the city when she was cornered by a man who asked her for the loan of a cigarette lighter.

Apparently spurned, the insistent individual approached the elderly lady again a few moments later, this time with a friend of his in tow.

After being ordered to hand over her cigarettes, the grandmother, seemingly immune to their intimidation, once again refused to comply.

Instead of letting her pass, or finding someone else to frighten into handing over a smoke, the pair allegedly picked up the granny, and simply threw her into the dark and freezing Garonne river according to La Dépêche.

At around 8.40 pm, a local man – somewhat ironically smoking a cigarette out his window – just happened to spot a figure struggling in the water close to Quai de la Daurade, and alerted the emergency services, who arrived on the scene within minutes.

When a rescue diver swam out towards the victim, he found her barely clinging on to a piece of wood, in a desperate effort not to drown.

“The current was very strong, and the water was icy,” one emergency worker told La Dépêche.

In the end, he managed to bring her safely to a bank of the Garonne river, where she was found to be suffering from hypothermia and shock.

The terrified, freezing grandmother was rushed to nearby Purpan hospital, where, as of Thursday, she was recovering from her extraordinary ordeal.

Departmental police are taking her testimony “very seriously”, according to Metro News, and have launched a public appeal for witnesses.

Anyone in the city of Toulouse on Wednesday night who may information regarding the alleged attack, is asked to call police on 05-61-12-77-77.