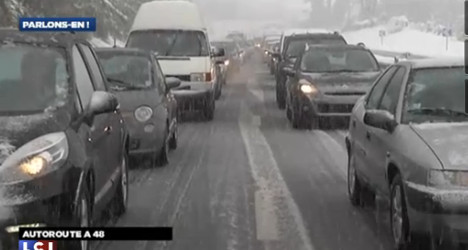 Driving conditions are expected to be hazardous in parts of France throughout Friday and Saturday. Photo: screengrab LCI/TF1

Meteo France the country's meteorological survey issued weather alerts for heavy snow and ice to eight departments in the centre of the country on Friday as the cold snap continued to bite.

The cold front is heading towards the Rhône Alps region with snow forecast throughout Friday until at least Saturday.

The eight departments on “Orange alert” are in the Auvergne, Rhône-Alps and the south of Burgundy. They are as follows: Ain, Allier, Isère, Loire, Haute-Loire, Puy-de-Dôme, Rhône  and Sâone-et-Loire.

As much as 20cm of snow can be expected in these areas.

Road authorities reported no major problems overnight saying motorists had heeded their warnings not to take precautions and not to make any unnecessary journeys.

In certain areas in central France trucks weighing more than 7.5 tonnes were not permitted to take to the motorways, as a precaution. School coaches will also not make be taking to the roads throughout Friday in affected areas.

On Thursday night electricity providers EDF reported there were still 48, 000 homes without electricity. Around 1,500 technicians have been mobilised. On Thursday the winter's first significant snowfall claimed the lives of three people in eastern France.

One person was killed, and two seriously injured in an accident involving a coach carrying 20 people on the A31 motorway in Haute-Marne, northeastern France, on Wednesday night, according to Le Point.

Separately, a technician with electricity provider ERDF died late on Wednesday night after being electrocuted while attempting to restore power in the Puy-de-Dome department of central France.

And in a third incident a 20-year-old woman was killed on Thursday morning when her car skidded off the road and crashed into a tree near the city of Mulhouse in the east.