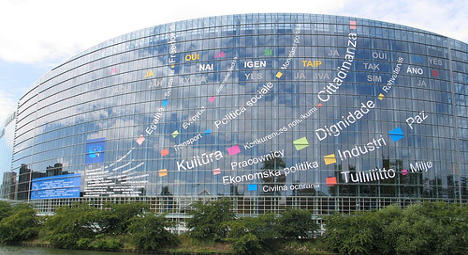 The European parliament in Strasbourg, but should it move to Brussells? Photo: Salim Shadid

When the European Parliament debated whether to move permanently from Strasbourg to Brussels this week British MEP Ashley Fox, one of the backers of the move, noted that only four MEPs stood up to voice their opposition "and they were all French."

It seems barmy to many that in a time of economic crisis in Europe the parliament, at present, meets either in the Belgian capital or in the eastern French city of Strasbourg. More than 700 deputies and officials commute between the two for a few days a month. Not only that but administration of the parliament is based separately in a third country –  Luxembourg.

But the growing support for the parliament to be based permanently in Brussels was seen clearly on Wednesday when MEPs adopted a text by 483 votes to 141 that backs changing the European Union treaty to allow the parliament itself, rather than member states, to decide on where it sits.

'A symbol of reconciliation' Paris sees it as step in the wrong direction and French MEP Philippe Boulland has slammed the move but tells The Local that it has nothing to do with his nationality and all to do with reconciliation.

“It is not just because I am French that I am against the move. Yes many French MEPs are against the idea of leaving Strasbourg, because it is a city that is symbolic of reconciliation in Europe.

“This is a city on the border between France and Germany, who not so long ago were in a conflict with each other.

"Strasbourg is a symbol of their reconciliation and it is appropriate the parliament is here because France and Germany were the two founders of the united Europe and they are the two driving forces behind the EU.

It’s also important to have a diversity in the locations of the institutions of the EU and not have them all centred in Brussels.

“It is true that having the parliament in two places complicates things, but we have to rise above that.

"The symbolism of Strasbourg is more important. It is not even about protecting the city itself, the local officials can do that. If it was based in another French city or in a German city I would also be demanding that it remains there.

“We have German and Greek deputies who support us," he added. The text supporting a move points to the fact the parliament would be "more effective, cost-efficient and respectful of the environment if it were located in a single place.”

It estimated extra annual costs of the shuttle between the two cities at €156-204 million ($210-275 million), including the additional cost of the Strasbourg site at €103 million.

But Boulland dismisses these arguments, insisting the campaign is being led by eurosceptics.

“The cost of the European Parliament is between €51 and €55 million each year, which represents 0.4 percent of the EU budget. That works out a cost of 10 centimes per person, per year for people living in the EU. It’s a false argument to talk about figures," he said.

Those who back the move also point to the levels of carbon dioxide emissions linked to the to-ing and fro-ing, which are estimated at between 11,000 and 19,000 tonnes.

Boulland however believes the authors of the report are greatly exaggerating this issue and also slammed them for presenting their petition, which claims to have 1.2 million names on it, of which the French MEP, says many are duplicates.

He does however recognise that day to day life would be much simpler if the parliament was permanently in Brussels and that “it is much more comfortable to work there”, but other things are simply more important.

“We can recognise that with the other institutions there, having the parliament in Brussels makes it much easier, but recognising history is important for building for the future," he said.