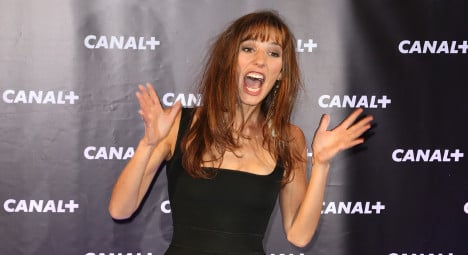 Doria Tillier stuck to her promise to present the weather forecast naked if France made it to the World Cup. Photo: Thomas Sansom/AFP

Jubilation at France's World Cup play-off win over ukraine was tinged with trepidation for television weather girl Doria Tillier, who had rashly promised to present Wednesday evening's forecast on Canal Plus in the nude if Franck Ribery and co. managed to pull off a turnaround few pundits believed possible.

When Karim Benzema, a son of La Banlieue (literally the suburbs but the sense is closer to 'the ghetto' in English), knocked in France's second goal to level the tie on aggregate, Tillier tweeted: "Shit! 2-0 to France, I'm beginning to get stressed."

But Tillier proved she was true to her word when she presented the weather forecast naked on Wednesday whilst running around a field in just her boots. Although the forecast is probably not the most coherent she has ever given, she has been commended for sticking to her promise.

Tillier even presented the forecast from the famous French village of Poil, which is often the butt of jokes, as when used with "A Poil" it means "get naked". Her task wasn't helped by the fact it coincided with the coldest day of the year so far.

Tillier has presented the weather on France's nightly news and talk show Le Grand Journal on Canal+ since August 2012.

Wednesday proved an expensive night for Dorcel, a hardcore France fan in more ways than one.

One of the world's biggest producers of pornographic films, Dorcel offered free access to his online videos in the event of a French triumph. Within a minute of the final whistle his server was overwhelmed by fans eager to take
him up on the promise.