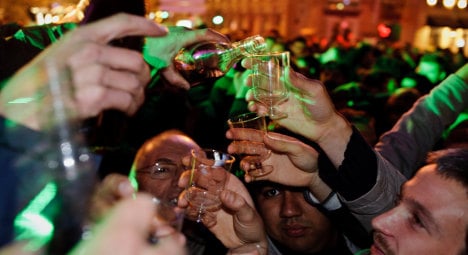 The much-hyped annual launch of the Beaujolais Nouveau, has developed into a big event in recent years and enjoys pride of place in the French cultural calendar.

And rightly so, says Jean Bourjade of the Beaujolais tradeboard, who tells The Local that it's a tradition that is here to stay, despite the fact the wine often comes under fire for being poor quality plonk.

“The Beajolais Nouveau tradition is massive in France. The French love their traditions, especially when it comes to drinking and eating. It’s also a huge night in Japan and in the United States.

“Normally in November we don’t have a lot to celebrate in France, apart from the fact we are going to the World Cup, so Beaujolais Nouveau night is great way for us all to go out and have fun."

Producers are promising a particularly fruity and lively vintage this year and are hoping to challenge the prejudices of those who dismiss the credentials of a wine that, because of the way it is made, can feature aromas ranging from bananas to bubble gum.

“The French often make the mistake of thinking a great wine is one that costs a lot money, even if they can’t afford them. Beaujolais Nouveau is marketed to be inexpensive. It is normally sold for between four and six euros which is intended to cater to the core market.

“The wine is very easy to drink. It’s an initiation wine. There are still people who like to slag it off, but it’s unfair,” Bourjade said. “It’s true that in the 1990s because we were producing so much it the quality of the wine was not as good as it should have been, but we realised it could not go on like that.

As ever, the annual festivities will kick off in Japan, which snapped up 8.8 million bottles of Nouveau last year and is the biggest export market among the 110 countries that take the region's wines.

Nouveau accounts for 200,000 hectolitres out of a total of 700,000 hectolitres of total wine production in the Beaujolais, a picturesque area of steep hills just north of Lyon and bordering the Maconnais, a southern outpost of Burgundy that is largely white wine territory, famed for its dry, usually unoaked, chardonnays.

The new wine is made by a process known as carbonic maceration which enables juice to be extracted from the Gamay grapes with almost no tannin secreted from the skins. As such, it is far removed in terms of complexity and ageing potential from the best bottles from the top Beaujolais villages, which include the evocatively titled Brouilly, Chiroubles and Moulin a Vent.

In its home market, Beaujolais Nouveau has suffered in recent years from the wider decline in wine drinking, tighter controls on drink driving and its association with hard to forget hangovers.

But Cedric Vallance, manager of the Louis D'Or bar in central Paris, does not feel it has fallen out of fashion.

"Maybe the 50-plus crowd are a bit fed up with it but the young still appreciate the festive side of Beaujolais Nouveau. All the tables we have booked tonight are by people in their 30s. It is a party wine."

And what about the 2013 Beaujolais Nouveau?

“This year’s Beaujolais is great. It’s very fruity, very silky and very smooth,” Bourjade said. “It’s very clear, which is a good thing. We had the most sunshine in August in the Beaujolais region that we have had in 50 years, which has resulted in a really good wine.