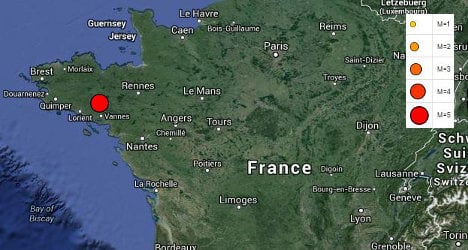 The site of Thursday's 4.5 magnitude earthquake near Vannes, in the Morbihan department of Brittany. Photo: Rénass/Screengrab

If you were Brittany on Thursday morning, and thought you felt the earth move – it wasn’t just you.

An earthquake measuring 4.5 on the Richter scale occurred at exactly 10.53am, according to France’s National Network for Seismic Surveillance (Rénass).

The epicentre of the seismic event was close to the town of Vannes, in the department of Morbihan, and lasted around 30 seconds.

The repercussions, however, were strong enough to spread momentary panic throughout the region, with France’s Central Bureau of Seismology (BCSF) receiving around 100 inquiries from members of the public.

Others took to Twitter, perhaps looking for confirmation that they hadn’t been imagining things.

One seemed sure it was an explosion rather than an earthquake, an indication of the force of the shockwave.

“WOW – was that an earthquake in Vannes?” asked another.

One witness in the town of Plescop told Le Parisien: “I was scared, it was really, really strong,” adding that the Breton region frequently experiences seismic activity, “but never anything this strong.”

BCSF seismologist Jérôme Vergne explained the regularity of earthquakes in the western region. "Seismic activity is quite common in Brittany, but of a low magnitude, and not sensed by the public," he told Le Parisien.

"Thursday's earthquake took place on one of the branches of a well-known and very ancient system of faults known as the South Armorican massif," he added.

An employee of the AFP news agency described the effects of the earthquakes. “Objects on the floor and the desk moved about,” he said, adding that the shockwave felt like a plane crash.

Hélène, a resident of Morbihan, told local newspaper Ouest France that the experience on Thursday “made [her] understand better what people in earthquake-prone countries go through.”

“The TV jumped, the walls shook, my armchair shifted – I was scared,” she added.

Despite the widespread fear caused by the 4.5 magnitude tremor, no injuries or property damage has been reported so far.

Were you in Brittany, and more particularly, Morbihan on Thursday morning? Did you feel anything? Describe it in the comments section below, and we’ll publish it.