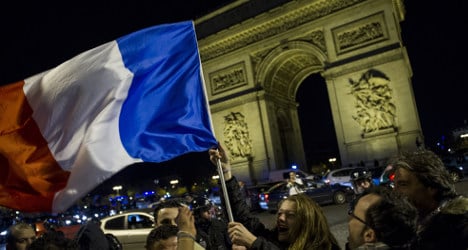 Not quite like 1998 but French fans celebrated their team's success in getting to Brazil on the Champs Elysées nevertheless. Photo: Fred Dufour/AFP

The national mood in France was given much needed boost on Tuesday after Les Bleus created history with a stunning comeback to qualify for the World Cup in Brazil next summer.

Didier Deschamps’ side produced an admirable performance to overcome a 2-0 first leg deficit by beating Ukraine 3-0 in front of a jubilant and relieved home crowd at the Stade de France.

It was the first time a team had achieved such a turnaround in a two legged play-off, and the defiant mood was summed by one group of supporters who held a banner aloft 'Impossible' n'est pas français" (Impossible is not French referencing Napoleon's famous quotation on the subject.

That was to become one of the themes of the night as a wave of euphoria swept over social media and the nation buzzed from the badly-needed shot to its collective self-esteem.

The victory, which many French deemed impossible before the match, sparked scenes of jubilation in Paris, where supporters descended onto the famous Champs Elysees to celebrate.

Even the French press, who were sharpening their knives before the match, doffed their hats to Les Bleus for their efforts in restoring the faith of the nation in its national team.

“RESPECT”, read  the one-word headline on the front cover of sports paper L’Equipe on Wednesday. The newspaper, which has been critical of Les Bleus in the past, simply said: “They did it!” and talked of a “page having been turned” after the debacle of the World Cup in South Africa 2010.

The headline in Le Parisien read “Welcome to Brazil” adding "Les Bleus have put a smile back on our faces."

The atmosphere was a remarkable turnaround from Friday night after the 2-0 defeat to Ukraine when it appeared the love and belief in the French national team had all but disappeared.

After their victory, French players took the opportunity to get one over the journalists, by showering them with champagne. (See the video below).

Tuesday night's victory was greeted as a watershed moment after the recent years of failure and scandal that have dogged the team.

Noel Le Gräet the head of the French Football Association (FFF) “talked about a new beginning” after the game. He also announced that Didier Deschamps’ contract as coach of the national team would be extended until the summer of 2016, when France hosts the European Championships.

Deschamps' existing deal had been due to expire after next year's WorldCup. "Didier has my full confidence and he will continue with Les Bleus until Euro 2016," Le Gräet told press at the Stade de France.

It was an expensive night for Marc Dorcel, a hardcore France fan in more ways than one.

One of the world's biggest producers of pornographic films, Dorcel offered free access to his online videos in the event of a French triumph. Within a minute of the final whistle his server was overwhelmed by fans eager to take him up on the promise.

Tuesday’s match was played in front of watching French President François Hollande, who will no doubt be hoping the result will bring a much-needed feel good factor to the country and perhaps even give him a boost in the opinion polls.

And he wasn’t the only politician celebrating victory. His ex-partner Ségolène Royal took to Twitter saying "What a pleasure to see all the tricolours in the stadium and for once all the players sang the Marseillaise."

Alexis Corbiere, from the Left Front party joked that the President could do with bringing the hero of the night Mamadou Sakho into his cabinet to replace the beleagured Prime Minister Jean Marc Ayrault. "Exclusive. Government reshuffle: Hollande sacks Ayrault and names Sakho Prime Minister.

Hollande himself praised the team and the manager for their exploits. "In France, we have a tendency to complicate the task. France won and the victory must be savoured. This qualification is down to the coach and the players only.”

Attention will soon turn turn to the draw that will take place on December 6th to find out who France will come up against in the group stages of the competition. Although for now, no one in France is thinking that far ahead, they are just relieved to see their team come back from the dead and restore a little bit of hope.

"This team's mission will not be to defend a homeland in danger or pull it out of the financial crisis, but just to make us dream," said L'Equipe.