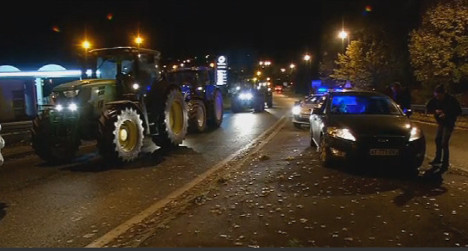 Tractors blocks a road into Paris on Thursday morning as French farmers protested over tax hikes. A fireman was killed in a car accident at one of the road blocks. Photo: Screengrab TF1 TV

French transport minister  Frédéric Cuvilier has demanded an "immediate lifting" of the blockade around Paris on Thursday morning, after a motorist – reportedly a fireman on his way to work – was killed in an accident at a road block in the Val d'Oise department.

Six others were injured when a tractor and a CRS riot police vehicle collided at a road block.

Cuvilier confirmed earlier reports of a fatality on his Twitter account. "Two accidents at farmers' roadblocks in Ile de France, with one death. Danger! I am calling for the immediate lifting of the roadblocks. #Responsibility"

The protest, provoked by anger over rising taxes and costs, has caused disruption on certain roads in the Ile de France region around Paris on Thursday morning, consistent with the farmers' stated goal of bringing traffic around the capital to a standstill.

According to the latest pre-rush hour reports there were no major traffic jams, but certain roads were affected including the N10, N20 and A6, and traffic on the N14 near Vigny is also facing disruption. Farmers set up a filter on the N104 atthe "Green Cross roundabout" at 8.30am, which was expected to slow traffic.

At Epones it is impossible to get access to the A13 motorway and on the N12 near Creteil, the road has been blocked.

Led by the country’s leading agricultural union, the FNSEA, the farmers announced on Monday they would be setting up filters on all major routes in and out of the French capital to slow traffic, as anger in the face of rising taxes reaches boiling point.

“We’re absolutely sick of it – regulations, checks, taxes, the ecotax, the hike in VAT, it’s all piling up,” French farmer Pierre Bot told Europe 1 radio, referring to a hotly-contested would-be tax on road transport, and a planned increase of VAT from seven to 20 percent in some industries.

Frustrated by a perceived lack of response from the Socialist government of President François Hollande, farmers based in the Ile de France region around Paris have decided to take the drastic measure of crippling traffic in and out of France’s economic capital.

“This was the only solution we could find to make ourselves heard,” said Bot. “There will be farmers, tractors, horses, trucks, and agricultural suppliers,” he added.

“[We’re fed up of] this increase in VAT from seven to 20 percent on fertilizer, accommodation for horses, the ecotax on transport, which will make the burden even heavier,” said Lecoq. The plan to engage in mass disruption and protests in Paris on Thursday morning comes after weeks of vigorous demonstrations with agrifood and road transport workers in the Brittany region of western France.