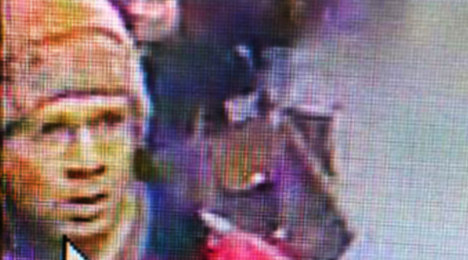 A new image of the suspected gunman was released by police on Tuesday. It shows the suspect at Concorde Metro station in Paris. Photo: AFP

5.30pm: PROFILE OF SHOOTER: Much has been made of the mental state of the gunman who opened fire at Libération and at Société Géneral. Forensic psychologist Daniel Zagury tells AFP the man did not seem to be suffering from extreme mental disorders such as delirium at the time of his actions.

"He attacks symbols but you get the feeling that he is not looking for anything spectacular," he said, adding that his actions seemed motivated less by a specific cause than by "all-out, intense resentment".

3:30pm: SEVERAL ARRESTED: French police have made several arrests and stops on Tuesday as they search for the gunman, but they have failed to find the man they are looking for. Most of the stops made were because the men matched the description of the shooter. This was the case when one suspect was arrrested in the 7th arrondissement earlier that led to false claims in one newspaper that the gunman had been arrrested. He was quickly released however when it turned out he was at the doctors when the shooting at Libération took place.

3.13pm: PHOTOGRAPHER WAKES UP: Libération is reporting that the young man seriously hurt in the shooting at their offices yesterday has been successfully brought out of the artificial coma doctor's had earlier induced. "He is currently awake and under intense surveillance from medical teams."

2.43pm: RENEWED APPEAL: "We will not rest until we got hold of him," says Interior Minister Manuel Valls. "I continue to call on our citizens to give the police all the information they can."

2.30pm: HIGH SECURITY: Armed guards were on duty outside the main offices of many French media companies on Tuesday (as seen below) in case the gunman decided to launch another attack. He has already targeted BFM TV and Libération.

2.19pm: FALSE ALARM: Those claims by Le Parisien that the gunman had been held now appear to be inaccurate. According to other French media outlets, a man matching the description of the shooter, was held by police in the 7th arrrondissement of the capital today, but quickly released when police realised he was not the gunman.

According to Libération newspaper, the arrested man had an alibi for the shooting at their offices on Monday.

2.05pm: SUSPECT ARRESTED? Le Parisien newspaper claims the gunman has been arrested in 7th arrondissement of Paris, citing a source "close to the investigation". This has not been confirmed by police, and Le Figaro has reported that police are denying outright that any arrest has been made.

1.57pm: French Interior Minister Manuel Valls says police are "working on" the shooter's DNA, traces of which may have been found inside the car that he hijacked on Monday, as well as on the cartridges of the gun he used.

"In the last few hours, work is being done on DNA traces from this individual, whether from the car or the gun cartridges," Valls said. If detectives have a DNA match they will be trying to see if it matches anyone in their databases as they attempt to identify the suspect.

12:40pm: A witness appeal issued on Monday has, according to reports in Le Parisien, resulted in 400 phone calls by members of the public to the emergency number that was set up.  "Of these, 120 have been taken seriously and are being followed up," a police source told AFP.

12:32pm: French police on Tuesday released a new image of the alleged gunman who opened fire at a newspaper's offices and at a bank in Paris on Monday. The image was taken from a CCTV camera as he walked through a Metro station in Paris. (see below)

This image was released by the Paris Police Prefecture and shows the alleged shooter walking in the underground station of Concorde, in the center of Paris.

It shows him wearing a beige hat, glasses and a red coat with a bag strung tightly over his shoulder. Initial descriptions of the shooter said he was wearing a "khaki parka jacket" and a cap, which suggests he may have changed his clothes after the first shooting at the offices of Libération.

As well as a shot gun, there were reports on Monday that the man had told a motorist he was also carrying a grenade in his bag.

RECAP: A huge police manhunt is currently underway to snare the suspect, who has been dubbed the "crazy shooter".

Officers on foot and in squad cars have been deployed throughout the nervous city, taking up positions outside media offices, along the Champs-Elysees avenue and at entrances to stations for the underground train system, the Metro.

Investigators have so far been unable to identify the gunman, described by French Interior Minister Manuel Valls as "a real danger". A witness appeal issued on Monday has, according to reports in Le Parisien, resulted in 400 phone calls by members of the public to the emergency number that was set up.

(This video shows the suspect threaten staff at BFMTV on Friday)

His motive remains unclear, but police believe he was also behind an incident on Friday in which staff at a Paris television station were threatened by a man carrying a gun.

The attacker, wearing a cap and wielding a 12-gauge shotgun, opened fire at the offices of left-wing newspaper Liberation at about 10:15 am (0915 GMT) Monday.

A 27-year-old photographer arriving for his first day of freelance work at the paper suffered buckshot wounds to the chest and stomach.

IN PICTURES: Gunman brings terror to streets of Paris He was taken to hospital in a critical condition. The newspaper later said he underwent surgery and was being kept in intensive care.

After fleeing the daily's offices in the east of Paris, the same man is believed to have crossed the city to the La Defense business district, where he fired several shots outside the main office of the Societe Generale bank, hitting no one.

He then reportedly hijacked a car and forced the driver at gunpoint to drop him off close to the Champs-Elysees in the centre of the French capital, where gun crime is rare.

There were rumours that the man was armed with grenades as well as the hunting-style pump-action shotgun used in the two shootings.

'Next time I will not miss'

Police said security camera images of the shooter suggested he was the same man who last Friday stormed into the Paris headquarters of TV news channel BFMTV to threaten staff.
In that incident, the gunman pumped his shotgun to empty several cartridges on the floor, while warning a senior editor: "Next time, I will not miss you."
"Given the similarities in the four incidents, between the modus operandi, the physical appearance and attire of the perpetrator, and also in the ammunition gathered, we believe we are dealing with a single perpetrator," Paris prosecutor Francois Molins said.
Prosecutors released photographs of the man taken from surveillance camera images and described him as white, aged between 35 and 45, of average height, with salt-and-pepper hair and stubble.
Liberation executive Nicolas Demorand said the shooting in the paper's entrance hall left staff traumatised.
"When you have someone with a shotgun coming into a newspaper's offices in a democracy, it is very, very serious, whatever the mental state of the person," Demorand told AFP.
A commentary in Tuesday's edition of the paper signed by Demorand is headlined simply: "We will continue".
The front page reads: "He pulled out a gun and fired twice", and inside, the daily devotes four pages to the unprecedented attack
An employee describes the moment the gunman walked in.
"The guy pulled out a gun from his bag and fired twice at the first person he saw. It lasted no more than 10 seconds, and anyone of us could have been hit. The shooter said nothing and left immediately," the staff member was quoted as saying.
Gunman 'not panicked at all'
A witness to the shooting outside Societe Generale's headquarters, Francisco Alvarez, told AFP: "I saw this guy with a cap and a shotgun, a pump-action shotgun, in his hand.
"I don't think he was necessarily targeting anyone, he shot in the air then into a window."
Philippe Antoine, the editor-in-chief of BFMTV, came face-to-face with the attacker during Friday's incident and said he had appeared calm and determined.
The man looked at him with "a lot of intensity and determination," Antoine said. "This was someone who was very precise in his movements, not panicked at all, someone who was in control."
French President Francois Hollande, speaking during a trip to Jerusalem, warned that the gunman "could still kill tomorrow or at any time".
Valls said that everything possible would be done to apprehend the shooter.
"This individual is on the run and he represents a real danger. We will do everything we can to arrest him," he said.