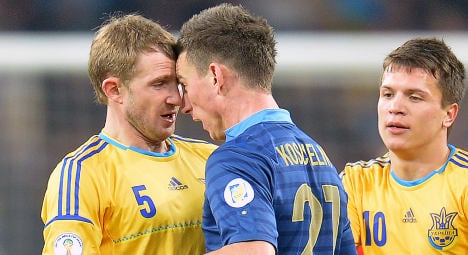 French players will be fired up for Tuesday's match against Ukraine, with a World Cup place and a whole lot more on the line. Photo: Sergei Supinksy/AFP

The French players have vowed to “die on the pitch” in their make-or-break play-off match against Ukraine on Tuesday, and if they don’t make it to Brazil they can expect to be savaged by the French press anyway.

Les Bleus go in to the second leg of their play-off facing the difficult task of having to score three times to win the tie after going down to a 2-0 defeat in Kiev of Friday, a match in which they rarely looked like finding the net once, let alone three times.

Following that match the players, never the most popular figures in the eyes of the public and media, were panned by the press and they can expect an even greater roasting if they fail to turn around the tie.

"When results are good, everyone feels better"

After the debacle of France's participation in the last World Cup, when a talent-rich squad was eliminated in the first round after a player mutiny, "Les Bleus" will not be easily forgiven for giving the country the blues once more.

"The national team is a sort of mirror for society," says Pascal Boniface,director of the IRIS think tank in Paris. "When their results are good, everyone feels better about themselves, a bit more enthusiastic.

"But if they're bad, it gets taken as yet another sign of the country's decline."

But it is not just on the economic front that football matters: the fate of the national team has also become closely related to the racial faultlines of French society.

When a multi-racial squad triumphed on home soil in 1998 under theleadership of Zinedine Zidane, the subsequent celebrations were hailed as a watershed moment, a symbol of a country that had overcome its racial tensions and embraced a new multicultural model for the future.

But by 2010, the optimism generated by the success of the black-white-Arab class of '98 had evaporated.

The divisions that beset the squad in South Africa were more about cliques linked to education and background than race.

But the opprobrium that followed the early exit from the tournament did have racial overtones, with two black players, Patrice Evra and Nicolas Anelka, identified as two of the principal troublemakers in the squad.

The squad's reputation has barely recovered since South Africa and some commentators fear that attacks on 'overpaid, spoilt' footballers with 'no class, no education' has become a subtle way of expressing what is, in reality, a general hostility towards the immigrant-dominated poorest suburbs of France's cities.

"The deepening of the economic crisis makes people look for scapegoats,"said sociologist Stephane Beaud. "Striking footballers, 'brown or black, can't speak proper French' — in the eyes of their critics they represent all that is bad about contemporary society.

"A kind of collective hysteria has developed around this team. Every player is scrutinised anxiously to see who knows the words to La Marseillaise – any player who doesn't sing along becomes a poor Frenchman."

Veteran far-right politician Jean-Marie Le Pen has long questioned the loyalty of players from immigrant families but it is not only on the fringes of politics that the issue of the racial make-up of the squad is an issue.

In 2011, it emerged that some coaches in the French Football Federation wanted to limit the number of black or Arab players being selected for elite youth academies to ensure a better supply of white players into the national squad.

For Le Pen, the worst outcome on Tuesday evening would be a heroic victory for France, says Boniface.

"For some people there is a particular relish in seeing the national teambeaten," he said. "If you argue that blacks and Arabs are too dominant in the team, then a victory will only disprove your theories.

"But it is a crazy view to say the problem is the players not sweating forthe shirt. On Friday they come up against opponents who were better than them. On Tuesday they will be desperate to get to Brazil. To think anything else is just stupid."

And despite the odds being stacked against them, there are plenty of people who still believe France will make it onto the plane bound for Brazil, not least the manager of the German team Joachim Loew.

But while Loew admits that he was shocked by France's first-leg defeat in Kiev, he backed Didier Deschamps's side to book a place in Brazil.

"I was very surprised that a star-studded team such as France with the likes of (Karim) Benzema, (Samir) Nasri and (Franck) Ribery had such difficulties against Ukraine and actually lost the game," he said, ahead of Germany's friendly against England at Wembley Stadium on Tuesday.

"If Ukraine get a good result from France, then they've deserved that ticket to Brazil, but my gut feeling is that at the end of the day, France will be able to turn things around.

"There's obviously a huge level of expectation in France and I can imagine that the French players, the coach and public are going through incredibly tense days, because not qualifying for the tournament would be akin to a national catastrophe.

"But I think France will go out very aggressively and do their level best to make it to Brazil."

The French President has also sent his support to the team from Israel, where is on an official state visit. Hollande implored the players to stick together.

"If they stay united, we have a chance of winning. They must remain united and mobilised," he said.

But if Les Bleus fail, it may be a long time before France becomes willing again to stake so much on the fortunes of its football team.

Will they make it to Brazil? Let us know what you think in the comments section below.