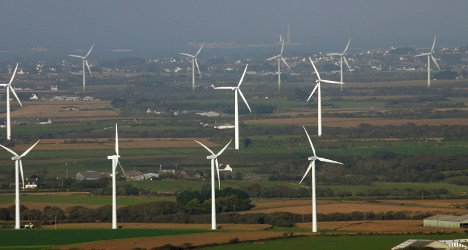 Opposition against wind farms like the the one pictured in Plouarzel in Brittany, is growing due to fears they are blighting the pristine French countryside. Photo: Marcel Mochet/AFP

France relies heavily on nuclear power but is working to shift to renewable energy sources and triple by 2020 its number of wind turbines, from the current 4,000 that are spread across 1,127 sites.

But opponents are urging the government to tread carefully so as not to damage France's thousands of kilometres (miles) of stunningly beautiful countryside – which range from Europe's longest strip of beaches to the peaks of the Alps.

Some critics have already won court cases outlawing turbines, and more legal challenges are on the way.

Erik Wallecan, the owner of the 18th century chateau de Flers in northern France, is one of them.

The 65-year-old successfully sued energy giant EDF-Gaz Suez to force it to remove 10 110-metre high turbines built around his estate in 2007.

The wind farm, the court ruled, had "completely altered the nature of a bucolic country landscape."

During the trial, the energy firm argued that it had respected a guideline of turbines not being set up within 500 metres of human habitation – which critics say clearly doesn't go far enough toward limiting their impact.

"Fifty percent of the cases (where turbines have been set up) are now before the courts," said Alexandre Gady, president of the Society for the Protection of the Landscape and Aesthetics in France.

"Wind turbines are objects that despoil, that crush everything," Gady said.

Critics say sites across the country are under threat, like the Sainte-Radegonde de Courant chapel on the Atlantic coast, parts of which date to the 13th century and which is to be surrounded by turbines. Protecting landscape is to 'protect jobs'

Supporters of wind farms have said opponents are exaggerating the impact of turbines and are opposed to progress.

"Some wind mills have now been classified as historic monuments… Why not one day wind turbines as well?"

Complicating things further, while France in 2006 ratified the European Landscape Convention, it has placed landscape protection under the environment ministry – which counts supporting wind energy as among its main goals.

"There is a conflict here between the ecological argument, which sees protecting the environment solely in terms of energy savings, and a landscape argument, which is… equally important," said author Michel Collot, who has written a book – "The Idea of Landscape" – on the philosophical importance of landscapes

"We can speak of biodiversity, but there is also the diversity of landscapes to consider," he said.

Global heritage and cultural agency UNESCO has already taken a stand, demanding a 20-kilometre (12-mile) exclusion zone around Mont Saint Michel when plans were floated for wind farms to be set up within view of the 11th century Gothic abbey.

With the site's status as a World Heritage Site at stake, local groups filed a legal challenge to the plan, which a court upheld in August

UNESCO even sent, for the first time, an expert group to study the potential damage to the landscape that a wind farm would have had at Mont Saint Michel, which attracts about 2.5 million tourists a year.

"The site must remain in the same surroundings in which it was set up," Petya Totcharova from UNESCO's World Heritage Centre told AFP.

Critics say the question goes beyond simply preserving the landscape – they say it's about saving jobs as well.

France attracts nearly 77 million foreign visitors annually, who bring in an estimated €37 billion to its economy

Some in the tourist industry fear the proliferation of wind farms could have a crippling effect on tourist numbers.

"The French state is not taking into account the impact of wind turbines on tourism in terms of jobs," said Patrick Weiten, the head of the local administration of the eastern Moselle region.

Weiten has filed a complaint at the European Commission against Germany for planning to set up 198-metre-high turbines at the border with France, which he argues takes away from the charm of the nearby 15th century Chateau de Malbrouck.

"The most important thing is to protect jobs," said Richard Vainopoulos, the president of TourCom, France's second-biggest umbrella grouping of travel agencies.

He said impact studies have shown that visitors to affected sites could fall by up to 50 percent if wind turbines are set up nearby.

Vainopoulos raised particular concerns about plans for a wind farm to be set up off the Normandy beaches, where tens of thousands of Allied troops landed during World War II.

"This would be catastrophic," he said.