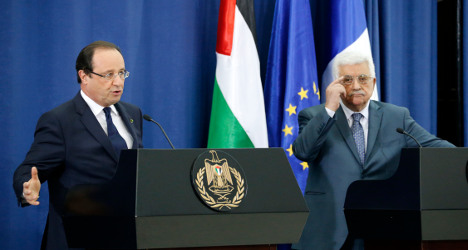 French President Francois Hollande (L) speaks near Palestinian leader Mahmud Abbas during a joint press conference following a meeting on November 18, 2013 in Ramallah. Photo: Marco Longari/AFP
In a speech after talks in the West Bank city of Ramallah with his Palestinian counterpart Mahmud Abbas, the French leader made an unequivocal demand for Israel to stop building on land seized in the 1967 Six-Day War.
"For peace and in order to reach an agreement, France demands a full and complete halt to settlement activity because it undermines the two-state solution," Hollande said on his first official visit to the Palestinian territories.
"Settlement activity complicates the negotiations and makes it difficult to achieve a two-state solution," he said, a day after talks in Israel focused heavily on the Iran nuclear issue.
His statement stood in sharp contrast to remarks made Sunday on meeting Israeli President Shimon Peres when the French leader said Paris expected Israel to make "gestures" on the issue of settlement activity in order to advance peace negotiations.
Since the talks resumed in late July, ending a hiatus of nearly three years, Israel has announced thousands of new settler homes, angering the Palestinians and taking the talks close to collapse.
A previous round of talks in 2010 fell apart just weeks after it began in a bitter row over Israeli construction on land the Palestinians want for a future state.
Welcoming Hollande onto the red carpet as the two national flags flew overhead at his Muqataa presidential headquarters, Abbas hailed his "historic visit" before the two went into an hour-long meeting followed by a working lunch.
Last week, Israeli plans to build another 20,000 new settler homes sparked the resignation of the entire Palestinian negotiating team, although Israeli Prime Minister Benjamin Netanyahu quickly rescinded the move to avoid a major fallout with the international community.
Despite the crisis, Abbas on Sunday told AFP that peace talks with Israel would continue for the full nine months agreed with Washington — "regardless of what happens on the ground".
He also said the negotiators would continue in their role until further notice.
"We have committed to continue the negotiations for nine months, regardless of what happens on the ground," Abbas told AFP in an exclusive interview.
'Three months without real progress'
Before meeting Abbas, Hollande acknowledged there had been little progress in the talks, urging the sides to drive the US-brokered process forward.
"The status quo is not the solution," he said while visiting a church in Jerusalem's Old City on Monday morning.
"Out of nine months, three have already passed without any real progress. We need to quicken the process, to speed it up."
But Hollande also made clear that France expected "efforts" from the Palestinians.
And he said a "realistic solution" must be found for the thorny question of Palestinian refugees who fled or were driven out of their homes during the war that accompanied Israel's emergence as a state in 1948.
On arrival at the Muqataa, a brief 15-minute drive from Jerusalem, Hollande paid his respects at the tomb of Yasser Arafat, who died nine years ago under mysterious circumstances which Swiss experts now say was probably due to poisoning.
Following his visit to Ramallah, Hollande was to return to Jerusalem and address the Israeli parliament ( 1530 GMT) in a speech containing a "strong message" on the peace process and a "very clear message" on Iran's nuclear programme, French officials said.
Hollande had on Sunday reiterated "unwavering support" for Israel and vowed that Paris would not yield on the Iranian nuclear issue.
"For France, as long as we are not certain that Iran has decided to give up on nuclear weapons, we will continue with all our demands and with sanctions," he said.
Hollande's visit comes before the P5+1 group of world powers are to resume talks with Iran in Geneva on Wednesday on a deal to scale back Tehran's nuclear programme in exchange for sanctions relief.
A previous round of talks ended on November 10 without agreement, with France taking a tougher stance than its Western partners in a move which won glowing praise in Israel.