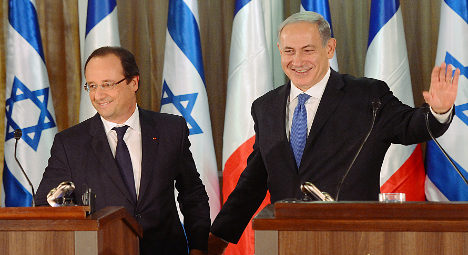 France, along with other major powers, took part in last weekend's marathon negotiations in Geneva in a bid to convince Iran to freeze or curb its nuclear activities in exchange for some sanctions relief.

Israel has expressed concern over the talks, warning Western powers against concessions and insisting they will get a better deal if they keep the crippling sanctions in place or even ratchet them up.

The visit, Hollande's first since he became president in 2012, will also see him travelling to the Palestinian territories to discuss Middle East peace talks which have been limping along for three months with little signs of progress.

And with his ratings flatlining in the polls back home, Hollande will also use his three-day trip to try to boost trade with Israel, which stood at €2.3 billion ($3 billion) in 2011.

But even before leaving the tarmac of Israel's Ben Gurion airport for the drive to Jerusalem, Hollande addressed the question of Iran's disputed nuclear programme, which Israel views as its greatest threat.

"France considers nuclear proliferation to be a menace, a danger, and in Iran particularly – a menace to Israel, to the region and clearly a menace to the entire world," he told Israeli ministers and dignitaries lining the red carpet.

"This is why France will not tolerate nuclear proliferation. And for France, as long as we are not certain that Iran has decided to give up on nuclear weapons, we will continue with all our demands and with sanctions."

An 'unflinching stance' on Iran

France has been praised in Israel over the past week for taking a tougher stance than its Western partners in the latest round of talks with Iran in Geneva, which ended last weekend without an agreement.

But with the negotiations due to resume on Wednesday, and talk of a deal in the offing, Israel was expected to pressure Hollande to remain strong.

"We are full of admiration for your unflinching stance to prevent Iran from acquiring a nuclear weapon for mass destruction," Israeli President Shimon Peres said at the welcoming ceremony.

Addressing Hollande as "my friend Francois," Netanyahu praised the French leader for his "firm stance" against "the unstoppable attempts by Iran to arm itself with nuclear weapons."

As part of Netanyahu's campaign to prevent world leaders from handing Iran "the deal of the century" by easing up on sanctions, Netanyahu will fly to Russia on Wednesday for talks with President Vladimir Putin.

And he said he would also discuss the matter with US Secretary of State John Kerry in Jerusalem on Friday.

"I hope we'll be able to convince our friends this week and in the following days to get a much better deal. It can be achieved," he said in a statement.

"Continuing to apply pressure (on Iran) and even increasing it can yield a much better diplomatic result."

On Monday, the focus will likely switch to the struggling Middle East peace process, as Hollande goes to the West Bank city of Ramallah for talks with Palestinian president Mahmud Abbas.

Kerry managed to relaunch direct talks between the two sides in July after a nearly three-year hiatus, but the Palestinians have said the negotiations are at risk of breaking down over Israeli settlement construction in the occupied West Bank and east Jerusalem.