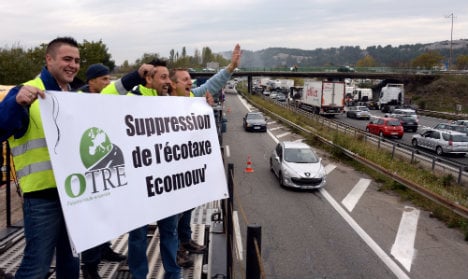 The road transport federation OTRE organised the protest and instructed truck drivers to leave one lane free for cars, but to block "foreign trucks".

"We do not want our competitors to carry on driving while we have stopped," OTRE leader Aline Mesples told AFP.

No violence was reported, and OTRE asked demonstrators not to attack radars, which have been targeted in recent protests.

The radars were set up along roads to screen passing vehicles and determine whether they need to pay the tax, which would apply to French and foreign vehicles carrying goods weighing more than 3.5 tonnes.

Protests over the "ecotax" on trucks, which aims to encourage environmentally friendly commercial transport, kicked off in earnest last month in the northwestern region of Brittany and eventually forced the government to backtrack and suspend the levy.

Despite the government's climbdown, protesters have continue to demonstrate for the complete scrapping of the tax, mostly in Brittany but also in other parts of the country.