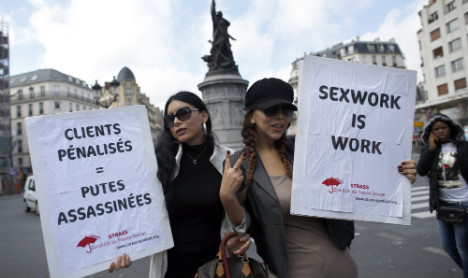 "Without supporting or promoting prostitution, we refuse the penalisation of those who prostitute themselves and those who seek their services," read the petition published in French media on Saturday.

"We demand a real debate without ideological prejudice," added the text, signed by about 60 people, including rock stars, filmmakers and a former culture minister.

A proposed anti-prostitution law will come before the National Assembly on November 27th and 29th. The bill seeks to penalise clients instead of sex workers in a bid to phase out prostitution. It seeks to impose a €1,500  ($2,000) fine on those paying for sex, and double that if the person is caught doing it again. Prostitution itself is legal in France, but soliciting, pimping, and minors selling sex are prohibited.

The latest petition comes amid fierce debate on the buying and selling of sex in France.

Antoine, a veteran French singer, told AFP that the signatories "agree that the government should fight against forced prostitution". But "an even more punitive law will only send the people who do this job further underground," he added.

Speaking to Le Point magazine, Antoine also said there was "no link" between this petition and a controversial manifesto which provoked outrage in October when it declared: "Don't touch my whore."

"We consider that everyone has the right to freely sell their charms — and even to like doing so," the manifesto said, in comments that were widely condemned on Twitter and by the government.