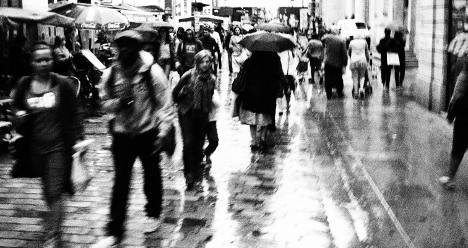 A senior French politician, fed up with negative economic chatter, has calculated that consumer pessimism is costing France no less than €20 billion ($27 b) a year. Photo: Francisco Gonzales

With unemployment at a record high, and a stubbornly stagnant economy to boot, there has been widespread talk in recent times about a “collective depression” gripping France.

Consumer confidence is a vital factor in any economic recovery, and French pessimism about the future has undoubtedly kept those “green shoots” from appearing.

Now one senior French politician, sick of hearing nothing but bad economic news, has endeavoured to highlight the damage caused by the French public's gloomy outlook, and even come up with the numbers to back him up.

Pessimism, according to Socialist MP François Brottes, is costing the French economy no less than €20 billion ($27 billion) every year, he declared on Thursday in an interview with Europe 1 radio.

That’s €300 ($404) that each Frenchman and woman are losing out on annually, or the equivalent of one percentage point of the country’s GDP, due to the noxious effects of negativity, Brottes calculated.

Fed up with the malaise in the French economy, the chair of the parliamentary committee on economic affairs, found himself in what he called a “fit of temper”, and contacted the Public Investment Bank – a government-run body that oversees loans to businesses.

They provided him the figures he wanted, but with the warning that they were very rough estimates.

“With all the restructuring going on, and with the hard times that people are going through, it’s normal for us to talk about it,” Brottes said on Thursday.

“But insofar as we only talk about that, what we’re saying is that there’s no alternative to it,” he added.

“Going down the path where we say that only the worst is possible – that’s not acceptable,” Brottes concluded.

It might be tricky to put an exact number on the economic damage caused by pessimism – notwithstanding Brottes’ efforts – but it can’t be denied that a certain despondency seems to be real and widespread in France.

Back in April, an extensive survey found that fully 70 percent of the French people felt a “collective depression” about their country.

Furthermore, the study, conducted by Viavoice and communications agency W & Cie, revealed that pessimism about the long-term performance of the French economy had shot up, from 64 percent in 2010, to 87 percent.