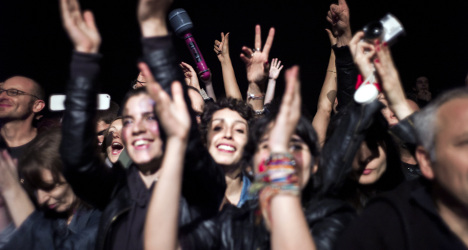 "People have to understand that Paris is a capital city, and a capital city moves and shakes, it makes noise.” Newly-elected Paris Nightlife Mayor Clément Léon. Photo: Fred Dufour/AFP

Who is Clément Léon and why is he all over the news ?

Léon was elected to the novel, and it must be said, unofficial post of Paris Nightlife Mayor over the weekend, and has been hitting the headlines all week in France, with his tough talk about “waking up” the French capital, and making its nightlife rival that of European hotspots like London and Berlin.

The election, unaffiliated with the city of Paris and run by an independent group of nightlife professionals, was held on Saturday night in – appropriately – 45 pubs across the city, with similar ballots taking place in Toulouse and Nantes.

Despite the promises of the five other candidates – one of whom called for “nicer bouncers” outside nightclubs – Léon emerged victorious in the end, getting seven percent more votes than his nearest rival, punk-rocker Gogol Premier.

So why the need for a nightlife mayor in Paris?

Paris needs a Nightlife Mayor, according to the organisers, in order to, well – breathe some life back into the night, as it were.

Despite its libidinous reputation in the 19th and early 20th centuries, and despite legendary venues like the Moulin Rouge and Folie Bergere, the city has been undergoing a bit of a lull in recent years.

In 2009, there was a raft of pub and club closings after persistent noise complaints from those living next to next to them, and that year Le Monde infamously dubbed Paris “the European capital of boredom.”

Technopol – a collective of concert-organizers, DJs, and other nightlife industry professionals – at the time issued an open letter and petition called “When the night dies of silence”, to try to rouse officials into action.

They sarcastically published a notice to would-be revellers considering a visit to Paris. “Closed due to death of the city. Please try a neighbouring capital.”

Even the New York Times took note, condemning the city as “staid and bourgeois.” One pub owner summed it up: “Paris isn’t the City of Light anymore – it goes to sleep at 11.”

So what does the new “mayor” plan to do about it?

Léon has proposed a few different ideas to shake things up in Paris.

First and foremost he’s come out fighting on the subject of noise pollution, taking to task Parisians who live in trendy neighbourhoods, but won’t tolerate the chatty smokers and thumping beats that emerge from the clubs and pubs that give their street its hip ambience.

“People want certain surroundings, but not the life that goes with it,” he told Metro News on Wednesday.

SEE ALSO: 10 Reasons why Paris is better than London Léon also wants to get extended hours for the Metro system, which at the moment shuts down at 2am on weekends and 1am on weeknights, and to have more late-night taxis available for Parisian party animals spilling out on to the streets.

Although his is an unofficial position, Léon might find himself in an influential position in the near future. Socialist candidate for Paris mayor, Anne Hidalgo, herself proposed the office of Nightlife Mayor in her manifesto.

With the election coming up next April, Léon and anyone else in the capital who takes fun seriously, will be hoping he'll have the ear of the next occupant of Town Hall.

"If the next mayor wants to bring me into their team, I'd accept that," he told Metro News.

His overall aim is to restore the French capital’s reputation as a global cultural centre, by night as much as by day, and to make it the rival to Barcelona and Amsterdam as it once did.

“Paris cannot and must not become a 'dormitory town'…Let’s not be the laughing stock of Europe. Let’s make Paris, and its nightlife, great again,” he wrote in the Nouvel Observateur on Thursday.