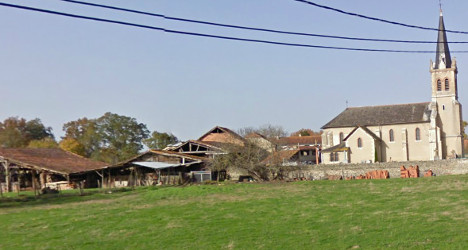 The hamlet of Nouilhan, in southwestern France which was in shock on Friday when a man went on the rampage, killing a 90-year-old, before eating his heart and tongue. Photo: Googlemaps

A suspected cannibal killed a 90-year-old in a sleepy southern French village then pulled his heart and tongue out with the apparent intention of eating them with white beans, sources close to the case said Friday.

The young, homeless man slipped into his victim's house at the edge of the isolated Nouilhan hamlet on Thursday evening, grabbed a metal object in the barn and smashed the old man's skull, a source close to the probe said.

According to his initial statements to investigators, the 26-year-old, who was responding "to messages or voices in his head", set fire to the body and then extracted his victim's heart and tongue to cook and eat them, added the source, who refused to be named but had seen the crime scene.

Police discovered the calcinated body of the victim with an open wound clearly visible on his side, and a bit of cooked meat on a plate with white beans taken from the old man's fridge.

The emergence of that detail will inevitably lead to comparisons between the case and Hannibal Lecter, the fictional cannibal in horror film "The Silence of the Lambs", who famously ate a victim's liver with "some fava beans and a nice Chianti".

So far, investigators are basing themselves on what the suspect confessed, and it is unclear whether he cooked or ate all the body parts he ripped out.

One of the victim's sons who lived nearby was alerted after he set fire to the corpse.

By the time police arrived, the suspect had already left the house and assaulted another man on his tractor, breaking his shoulder.

He then entered another house and was chased out by barking dogs and the owner, but not before grabbing a shotgun.

"It would seem he acted because of voices, messages that he was receiving and that were telling him to act in this way. Those are his first statements," she said.

He was being held in the nearby city of Tarbes and prosecutors on Friday recommended he be sectioned after a psychiatric assessment determined he was suffering from a "mystic delusion" at the time of the crime.

According to a preliminary probe, the suspect had no link with the victims. He had once been caught drink-driving, but apart from that had no criminal record and no history of psychiatric problems.