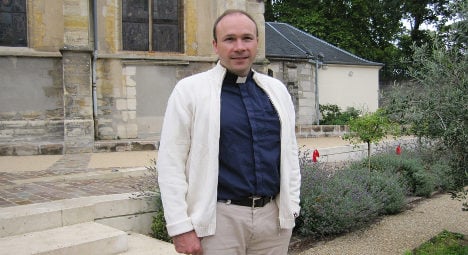 The 42-year-old Fr. George Vandenbeusch, who was kidnapped in Cameroon, is being held by Islamist militants from Boko Haram, it was claimed on Friday; Photo: Ville de Sceaux/AFP

"I can confirm that the French priest is in the hands of mujahideen (fighters) from Jama'atu Ahlis Sunna Lidda'awati wal-Jihad, who carried out the operation that was co-ordinated with Ansaru," the source, who demanded anonymity, told AFP.

The name he gave is that of Boko Haram, which prefers to go by the title in Arabic, which translates as "People Committed to the Propagation of the Prophet's Teachings and Jihad".

Ansaru is an offshoot of the militant group and has previously claimed kidnappings of foreign nationals.

After news of the kidnapping reached France President Francois Hollande on Thursday urged the French "not to put their lives in danger" after Vandenbeusch reportedly ignored repeated warnings he was in a risky area.

Hollande also promised that "everything will be done" to secure the release of Roman Catholic priest Georges Vandenbeusch, who was kidnapped by armed men near the border with Nigeria.

"We are doing everything possible for this priest to be found and to give him back his freedom," Hollande said during a visit to Monaco.

"He was practising his faith in an area he knew to be dangerous. Nevertheless, everything must be done and will be done so that he can released without delay," Hollande said.

"I would also ask all of my compatriots who live or travel in what I would qualify as high-risk areas to do nothing to put their lives in danger or to expose themselves to kidnappings," he added.

Vandenbeusch was abducted near the town of Koza, about 30 kilometres (20 miles) from Nigeria, the French foreign ministry said in a statement.

"We are working with Cameroonian authorities to secure his release," it said.